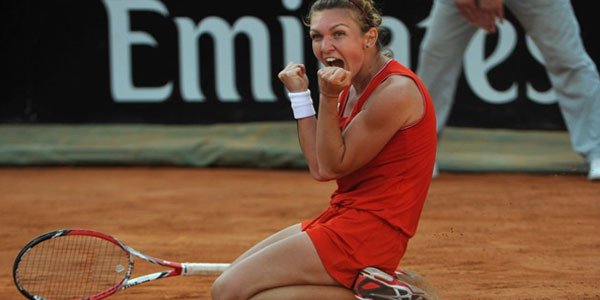 Simona Halep is a bit battered but should be a force in the upcoming U.S. Open

World number two, Simona Halep has put her body through torment in the past few weeks. The Romanian has been battling leg injury since her Roger’s cup loss to Belinda Bencic. Her early withdrawal from the final in Toronto was the result of her leg, heat exhaustion and cramps. Instead of withdrawing from the next tournament, she decided to continue her preparation for the U.S. Open. Online gambling websites will take notice.

• Halep has the best record on hard courts in the WTA
• Started tennis at 4, but practiced regularly at 6 years old
• Progressed from world number 166 to number 2 in four years

In the Cincinnati tournament last week, Halep persevered through the rounds and ended up in the final match against Serena Williams. Halep, who is 1-5 against Williams, continued to gain break points and fought off three match points in a tie break. Although Williams won the title, Halep left a clear message to fans and punters bet on sports in US. . The Romanian will rest for a week and be ready to resume her play at the U.S. Open. Currently, Halep has the best record on hard courts in the WTA.

Had a great game but in th end was defeated by Serena (Photo: Rob Carr/AP)

Simona Halep was born in Constanta, Romania in 1991. Although she started tennis at four, she didn’t practice regularly until she was six. In her efforts to play like her brother, the Romanian increased her skills. By the time she was 16, the family moved to the capital of Bucharest to pursue her tennis career. A year later Halep was competing in junior tennis competitions.

In 2008, Halep played junior tennis beginning with the Nottinghill tournament where she was defeated in the finals. In the Australian Open Junior Championships, the Romanian advanced to the semifinals. Soon the future world number two won in the finals at Trofeo Bonfiglio over Bojana Jovanovski. At the French Open Junior Championships, Halep defeated a fifth, 13th and a second seeded player to get to the final. In the all-Romanian final Halep won over Elena Bogdan.

In order to prepare herself for the professional ranks, Halep started to enter International Tennis Federation tournaments and made gambling news. She quickly won two tournaments in Bucharest worth USD 10,000 each. Although the Romanian lost at the main ITF USD 50,000 tournament, she won an ITF USD 25,000 tournament in Sweden. While continuing to play in the ITF circuit, Halep qualified for professional WTA tournaments. At the Paris Indoors, the Romanian made it to the second round.

At the ITF USD 50,000 in Makarska, she advanced to the finals without dropping a game and lost to Tatjana Malek. After a quarterfinal loss at the ITF USD 100,000 tournament to Andrea Petkovic, the future world number two entered the French Open. Qualifying for her first Grand Slam, she won her first match and lost her second. Halep won USD 100,000 in three more ITF tournaments and then decided to undergo breast reduction surgery. The promising player complained that her breasts interfered with her game.

Simona Halep’s career would progress in the professional ranks

In 2010, Simona Halep entered the Australian Open, but lost in the qualifying round. With a WTA ranking of world number 166, the future Romanian star entered the Andalucia Tennis Experience in Marbella, Spain. Not only was she able to qualify, but Halep reached the semi-finals. After winning four matches at the Barcelona Ladies Open, she reached the finals of the Grand Prix SAR La Princesse Lalla Meryem Fes. Losing to Iveta Benesova, Halep was later defeated in the first round of the French Open.

Her 2010 season ended with defeat by Jelena Janković in the first round of the U.S. Open. The next year proved a bit more successful as Halep was able to reach the third round of the Australian Open losing to Agnieszka Radwańska. In the French Open the future number two made it to the second round. She repeated the same progress at Wimbledon, but lost to Serena Williams. The largest victory of the year for Halep was when she defeated Li Na of China in first round of the U.S. Open.

In 2012, Halep lost in the first round of the Australian Open, but progressed to the third round of the Indian Wells Masters and the Miami Masters. Although she progressed to the quarterfinals in Barcelona, Halep suffered first round losses in Madrid and Rome to Venus Williams. The young Romanian’s biggest success was her semi-final appearance at the Brussels Open beating world number one Jelena Janković in the first round. If online sportsbooks in the U.S. were to take notice, then would’ve been the time.

The next year Simona Halep won six WTA titles. Entering the year as world number 47, she wasn’t impressive until the International BNL d’Italia when she defeated Svetlana Kuznetsova, Radwańska and Janković to get to the final. Although Halep lost in the final to Serena Williams, the experience turned her game around. After a first round loss at the French Open, she won titles at Nürnberger Versicherrungscup and the Topshelf Open. At Wimbledon, the Romanian claimed her first Grand Slam match of the year. Simona ended her year as the only player to win on all four surfaces.

The Indian Wells trophy she won, was too heavy for her to lift (Photo: libertatea)

Halep entered 2014 as world number 11 and quickly progressed. At the Australian Open, she advanced to the quarterfinals and she won her first Premier 5 tournament in Qatar. As a world number five, she reached her the WTA Premier Mandatory final at the Mutua Madrid Open losing to Maria Sharapova. In the French Open, Halep reached the semi-finals. Soon Halep overtook Na’s position as world number two. At the WTA Finals, the Romanian champion defeated world number one Serena Williams in a match 6-2, 6-0.