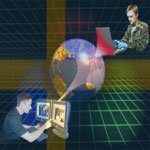 On January 28, the Swedish government proposed legislation to implement The European Union’s Data Retention Directive. The Directive will require Swedish internet, mobile and phone providers to keep customer date for six month. The proposed law will force providers to track and record every connection to a website and telephone number. Thus every ISP will have to store the URL, time, location, subscriber and traffic information for every connection for six months.

The EU Directive, in place since 2006, has not been implemented by Sweden causing the European Commission to file a complaint. Last year, Sweden lost its appeal against implementing the Directive at the European Court of Justice. The purpose of the Directive is to assist law enforcement with “investigation, detection, and prosecution of serious crimes” by storing records of all subscriber activity. Such crimes could include failure to pay taxes on income from internet gambling.

The law could be used to monitor all Swedish nationals who connect to foreign online casinos and poker rooms. According to Swedish gambling laws and tax laws, all gambling (including losses) is taxable. Erik Boman, a spokesman for the Swedish tax agency stated, “Internet poker is something we’re definitely looking into.” The tax agency will be able to use the Data Retention Directive to link specific Swedish users connecting to foreign online casinos, therby increasing the Tax Agency’s chances of winning in court.

Some Swedish ISPs plan to circumvent the Directive by filtering all data through an ‘anonymizer service’ which will scramble the saved data. Privacy rights groups believe that information should be saved based on individual cases by a court order, and not just “general storage of all the people’s communication.” Gambling at an online casino in Sweden is legal, as long as the casino is located inside the European Union.