Swedish Lottery Gambler Cheated out of Millions by Grinning Socialists 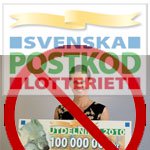 A 32-year-old Linda Nyqvist was denied her share of 80.5 million Swedish kronor ($11.7 million) she won in the Swedish Post Code Lottery (Postkodslotteriet). The Swedish Tax Agency (Skatteverket) had her registered at the wrong address, which voided her right for the lottery win.

The Swedish Post Code Lottery is operating in full compliance with Swedish gambling laws and is based on a unique concept, where if one person buys a ticket and wins, all others who share his post code and bought tickets also win a share of the jackpot.

Linda has moved to the village of Hjo back in April 2011 and told Sweden gambling news that she has officially registered the move with the tax authorities. However, the Swedish Tax Agency denies knowledge of Linda’s change of address.

Linda Lyqvist told the media: “I saw the headlines in the press saying we had won and my heart started beating harder. But nobody had called me.” She later called the lottery and was told that she was not registered with the tax agency at her current address.

Nyqvist claims: “Something went wrong, but I don’t know how and cannot find out either. The forms have been lost either at the post office or at the tax office. It is awful.”

The spokesperson for the Swedish Tax Agency, Ingegerd Widell, stated that the government agency didn’t receive the change of address notification from Nyqvist. Widell commented: “There’s nothing I can say or do.”

The Post Code Lottery administrators explained that Nyqvist is not considered as a winner since she does not officially live at her current address.

One of the adnimistrators commented: “It is of course disappointing when you think you have won but realize that you haven’t after all. It is clear from our perspective that the draw has been made and there is nothing we can do to change it.”

This couldn’t have happened at online casinos in Sweden, since every address is verified before members are allowed to engage in online casino gambling.