The Cleveland Cavalier VS The Golden State Warriors: A Review of NBA Finals Game2 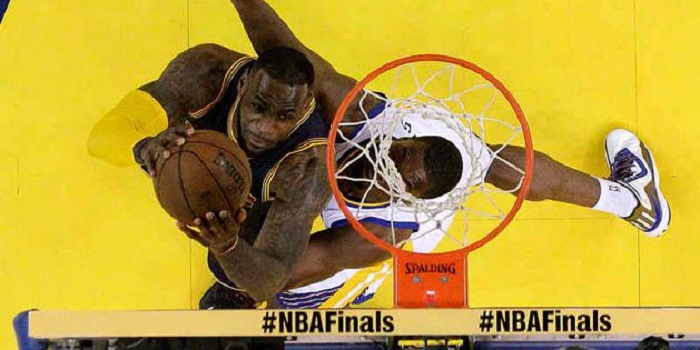 Cleveland takes one from the Warriors at home.

Last match up started with both teams coming out of the starting blocks a bit nervous. Finally Cleveland was able to put their experience to work as they were able to get to a substantial lead. Golden State didn’t challenge the lead until deep into the 2nd quarter, but Cleveland was still able to beat the Warriors 51-48 at the half. The Warriors would have a job ahead of them the next half.

● Curry called his team’s loss a fluke that won’t happen again.
● An Alley Oop pass to Igadowa ended Cleveland’s 13-2 run
● Lebron was able to make another triple-double extending his record

Golden State quickly obliged as they picked up the intensity. Cleveland’s defense was incredible forcing the Warriors to perform individual by splitting them up through man to man defense. Luckily, the Warrior shooting got a little better and they were able to hold up. The lead switched several times as the game ended up going into overtime. The 44-point Lebron James was unable to score in overtime as was the rest of the Cavaliers as Golden State went on to dominate the rest of the game making US gambling news.

Cleveland, through persistence, took the first half by two points

A strip from LeBron on the second exchange led to a failed three-pointer as both teams tried to get something in. Finally Clay Thompson was able to put one in. James shot an airball as Warriors drove back up and Andrew Bogut tried to deliver and failed. Finally after two more transitions, Cleveland got it in. James finally got one in at 8.26 in the quarter. Klay drilled in a three pointer as he started to get hot. After a second a foul, Thompson was now getting cold and had to sit down.

The Warriors were building a bit of a league on the Cavaliers as they tied to isolate on offense. After a few transitions a behind-the-back pass by the Curry to Barbosa in the corner is wide open as he drained a three-pointer giving the Golden State an eight-point lead. Timothy Mozgov tried to close the lead with a layup as three more transitions led to a foul and Mozgov on the line as he tied the game. Although neither team shot over 40 percent an 8-0 run by Cleveland put them in the lead.

The 2nd quarter is on the way as both sides were making mistakes. James committed the 4th team turnover of the quarter as Thompson did more damage. Lebron finally put up a rare three-pointer and it goes in. Before long, he was on the line making in both free throws. At 6.02 Thompson was still putting it in the hoop. But a quick one by bench player James Jones brings it within on. Anybody less adventurous who used online sportsbooks in the US would be pleased with the tightness of the spread.

Jones continued on the next transition scoring eight points in 10 minutes and putting Cleveland ahead. A Warrior Alley Oop pass to Andre Igadowa as he put it in end Cleveland’s 13-2 run. With 2.15 minutes left, Curry got in his first three-pointer. Cleveland still held on to a three-point lead. The action picked up towards the end as shots were being made back and forth. Cleveland ended the half with a two-point lead.

Cleveland continued to press on Golden State and applied pressure as the Warriors tried to break into the two point lead but with no avail. After three failed three-point attempts. Curry was able to get the rebound and went up the paint and did his thing to make two more from in the paint. LeBron goes on the inside and is blocked twice as Curry went back down to the other end for a failed attempt. This wasn’t the kind of game you’d want to wager on individual performance within US gambling laws or otherwise.

Cleveland, who missed their last 10 shots from the field, finally got one in from Mozgov. Regardless of Warriors moments, Cleveland and company were still up by two. A double-team on Curry caused a rare turnover it making it 10 for the team. LeBron brought the ball down the court and drew the a third Thompson foul in the paint. Thompson soon redeemed himself with another three-pointer making it 20 for him.

Thompson started the 4th quarter with a three-point in the first minute to tie the game up at 62-62. Matthew Dellavedova made two strong jumpers of the game then missed two.
Clay Thompson sunk another crazy shot and then drew his fourth foul. LeBron sinks his second three-pointer of the game. Tristan Thompson and J.R Smith aren’t having the best scoring games, but are crucial in defense. Lebron received a hard foul and as a result the Cavaliers got to rest for couple a minutes as well as put in a couple of free throws.

At 14 team fouls, any mistake Golden State makes puts Cleveland on the line. A beautiful pass to J.R Smith turned into a three-pointer making the largest lead of the game at 10 points. After some free throws and Lebron put in his third three-pointer of the game. The Cavaliers defensive adjustment worked brilliantly as the Warrior offense was split. Although Curry suffered the worst performance of the playoffs, the Warriors still managed to get into overtime where they lost by Dellavedova and his free throws 95-93.