The Gambling Film Rounders: A Cult film that Features Poker 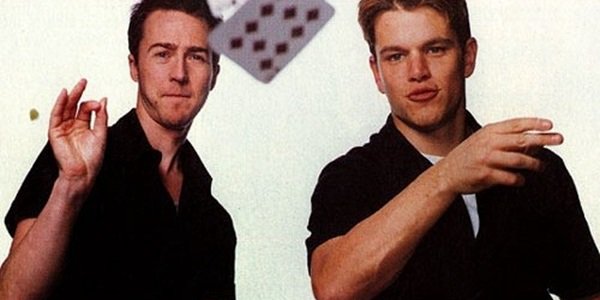 The 1998 gambling film Rounders, starring Matt Damon, is about a retired poker player. The film, directed by John Dahl, is an excellent portrayal of gambling under severe circumstances. Although the film is a bit long, Rounders includes more detailed card playing which may suit poker enthusiasts. Matt Damon gives his usual solid performance that many may have grown a bit accustomed to. Nevertheless Damon turns it on.

Edward Norton’s performance is wonderful as usual. As the antagonist “Worm”, Norton can once again play despicable characters we associate him with. The role brought Norton a SEFCA Award for Best Actor. The film, written by David Levien and Brian Koppelman, is impressive. Overall Rounders should’ve been better received by audiences. The film cost 12 million dollars to make and took in about twice as much in the box office. Rounders had a positive effect on gambling news and reached cult status.

In the gambling film Rounders, Mike tries to stay away from poker

Mike McDermott, played by Damon, is a poker playing prodigy who had the misfortune of running out of luck. Mike’s timing was horrible as he reached the pinnacle of his career which was decided upon one hand of Texas Hold ‘em poker. His adversary was Teddy “KGB”, played by John Malkovich, a Russian mafia boss who operated an illicit poker parlor. As a result, Mike lost his entire fortune of 30,000 dollars.

Sometimes the villain seems to get the upper hand. Most of the time in movies, actually

Disillusioned about the game, Mike promises to walk away from poker for good and focus on his studies at law school. In addition, he promises his girlfriend and classmate Jo, played by Gretchen Mol, he will never play again. In order to earn some money, Mike works as a part-time delivery truck driver. Mike’s poker mentor Krish, played by John Turtorro, gave him the job because of his concern for him.

As the gambling film Rounders progresses, Mike gets over his poker days and keeps his promise to concentrate on his studies and work. Mike is then confronted by his friend, Lester “Worm” Murphy. Just being released from prison, Worm is forced to deal with his past responsibilities. Like Mike, Worm was also a poker player who ran into a slump. Unfortunately, he ended up owing a lot more money than Mike.

With the help of his old friend Grama, who partnered with KGB, Worm had an outstanding debt before he went to prison. Now Worm has “to face the music” and somehow clear his debt. Having no other place to go, Worm asks Mike for help. Soon Mike breaks his vows and returns to violating US gambling laws on the poker table. As expected, poker negatively influences his studies as well as his relationship with Jo.

Later in the gambling film Rounders, Mike returns to poker to help his friend

Worm didn’t have much time to pay off his debts as he was given a five-day deadline by KGB. Mike and Worm have to move very quickly to make enough money. Soon Worm’s habits, that may have landed him in prison, started to come back as he tries to convince Mike to cheat. Mike, telling his friend no, has enough faith in his abilities to continue to play an honest game.

After playing many card games around New York, Mike and Worm are close to earning the 15,000 dollars needed to clear the debt with KGB. Worm’s desire to cheat outweighed everything else. He gets caught during a state trooper’s game trying to deal preferred cards from underneath the deck. Worm’s “base dealing” results in a physical “beat down” and the two are forced to relinquish all their earnings.

The film has a great story, and even poker experts can enjoy the gambling sequences

The gambling film Rounders approaches its climax as Worm, shaken up by his possibly grisly future, decides to leave town. Mike, who refused to “skip town”, is left with the responsibility of clearing Worm’s debt. After approaching, Professor Petrovsky at his law school, Mike is given a loan. With 10,000 dollars, Mike confronts KGB and challenges him to no limit Texas Hold ‘em poker. Mike defeats KGB and is able to pay off Worm’s debt and pay back some money to the professor.

Mike decides to leave, but is baited by KGB to play one more time since he is only paying him back, what Mike lost to begin with. Reluctantly agreeing, Mike plays again putting everything “on the line.” Mike is losing, but spots a “tell”, a change in KGB’s behavior indicating the strength of his hands. Mike takes advantage of this and wins, clearing him of his debt with the professor and regaining his original 30,000 bucks. Mike leaves law school, bids his girlfriend farewell and heads for the World Series of Poker Main Event in Las Vegas to make US gambling news.