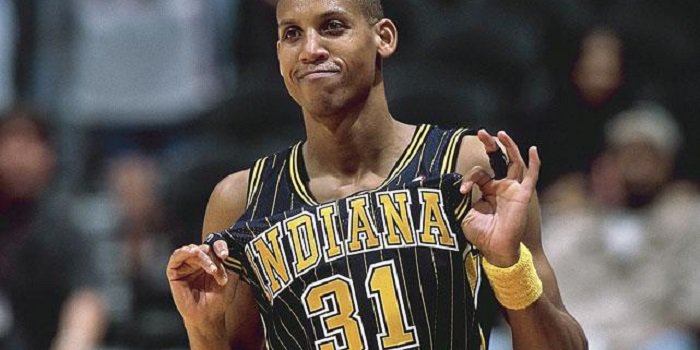 We conclude our list of the NBA’s greatest scorers.

Some people might have doubt about what a good scorer brings to the game. A scorer is a singular component and basketball is a team sport. A person who only scores tends to negate the game of basketball. Unfortunately some of the greatest scorers were strong in other areas as well. We will continue our look into the greatest scorers to play the game. These players, like pagan gods, set the world on fire as crowds danced around the flames.

• Karl Malone is second in scoring in the history of the NBA at 36,928 points
• Reggie Miller scored 25 points in one quarter in Game 4 in the playoffs in 1994
• Chamberlain was the only player to average 30 points and 20 rebound in a season

On June 1st, 1994 Reggie Miller produced one of the greatest playoff performances ever. Miller’s Indiana Pacers were behind the New York Knicks by 12 points at the end of the 3rd quarter of Game 5 of Eastern Conference Finals. In the 4th quarter, Miller quieted the New York crowd as he scored 25 points in one quarter winning the game 93-86. Although New York ended up winning the series, Miller and his scoring made US gambling news.

Reggie Miller the three-point master and the Mailman start off

Reggie Miller was a three-point machine holding the record for them when he retired. He also was a leader in free throw accuracy five times. The five-time All-star never won a ring possibly because he chose to stay with his Indiana Pacer team for his whole 18-year career. Miller is also a member of the 50-40-90 club which he entered in 1994.

Miller was the guy you feared to touch the ball. Miller once scored eight points in 8.9 seconds in a playoff game against the New York Knicks giving him the name “Knick Killer.” Facing the 1995 Chicago Bulls in the Conference Finals, Miller was able to get away from Jordan and make a three-pointer with .7 seconds left of the game pushing the series to a seventh game and almost won before the last two minutes.

Karl Malone was one of the greatest players to have never won a championship. The Mailman was part of the dynamic duo of him and point guard John Stockton. The two were potent enough to get nominated into the 50 greatest players of all time as well as the 1988 Dream Team. Unfortunately, the perennial All-Stars played for the wrong team. During the regular season he would have been a safe beat using online sportsbooks in the US.

At 36,928 points, The Mailman is second in scoring in the history of the NBA behind Kareem Abdul Jabbar. Malone used his size and strength to muscle his way inside offensively and defensively. He had a mid range jumper that was as precise as a dagger which he used to slay many a team. He holds the NBA record for attempted free throws and offensive rebounds.

The legendary Elvin Hayes and Wilt “the Stilt” Chamberlain

Although he had only won one NBA championship in 1978, Elvin Hayes is ranked 6th in scoring at 27,313 points in his 16-year career in the NBA. He ranks third in minutes played at 50,000 missing only 9 games in his career. He led the University of Houston in the 1968 NCAA championship win over UCLA where he outplayed Kareem Abdul Jabbar in what would be called the “Game of the Century.”

The fans loved him as Hayes brought his own kind of “showtime” to the Washington Wizards, previously called the Washington Bullets. Using his patented turnaround jumper, Hayes racked up the points. Ranked at 4th in rebounding at 16,279, Hayes superb defensive skills made him invaluable. Maybe this accounts for why many coaches and players put up with Hayes “abrasive” personality which was illustrated in his strong play.

Wilt Chamberlain is more a figure of American sports folklore if you were to look at this statistics. He could easily be considered evidence for the benefits and drawbacks of great individual play. In his career with three teams, Wilt “the Stilt” only one two NBA Championships. The 7 foot 1 Chamberlain is a walking record book holding most his NBA records for 20 years after his retirement. I’m sure people made as much money with Wilt within as they did outside US gambling laws.

Wilt holds the record for highest NBA scoring average 50 points in a season and had seven scoring, nine field goal percentage and 11 rebounding titles. Amazing enough, this player who once had a 100 point game actually led the league once in assists. Although he was a 13-time NBA All-star, he only received the NBA MVP four times for the regular season and once for the Finals.