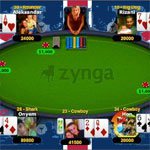 Ashley Mitchell, an IT professional residing in Paignton, Devon within the United Kingdom, confessed to the Exeter Crown that he hacked into Zynga’s Facebook online poker application and stole 400 billion virtual poker chips.

Zynga is one of the most popular applications on the fashionable social networking sites, enabling Facebook members to play online poker in the UK and around the globe against family, friends, and strangers. While the Zynga’s play money is theoretically worthless — as Zynga lacks any mechanism, obligation, or even desire, to transfer real money back to winners — Zynga still profits enormously from internet poker players purchasing the virtual chips.

The legitimate sale of these 400 billion poker chips from Zynga would have cost internet poker players a total of £7.5 million ($12 million). However the prosecutors placed the black-market value of the virtual chips “in the region of £184,000 [($298,000)],” after Mitchell unlawfully liquidated £53,000 ($86,000; about 1.2 billion chips) in lots of 1 billion for £430 at a famous internet auction site (undisclosed, possibly eBay) before being apprehended.

Although Prosecutor Gareth Evans concedes that Zynga endured no material trouncing from this enormous theft, there is an ongoing concern that Zynga’s reputation may suffer among Facebook poker players and other potential consumers, even though those concerned about getting a return on their their money would clearly be better off playing at online poker rooms in the United Kingdom (or elsewhere around the world).

Mitchell now awaits sentencing, having accepted a plea of guilty for 4 counts of converting criminal property, in addition to a single count of violating the Computer Misuse Act by securing unauthorized access to a computer with the intent to commit an offense. The Judge Phillip Wassall informed Mitchell that he is looking at a considerable jail term for the “sophisticated” offences, which the judge compared with a theft from the National Mint.

Mitchell was previously 2009 convicted and given a suspended 40-week jail sentence for hacking his employer’s (the local council’s) website in 2008. He altered data in order to misappropriate £3,498 ($5,673). Back then, Mitchell allegedly was “wrestling with a gambling addiction” and lost £3,000 ($4,865) to internet gambling in the United Kingdom. His current violation breaches the terms and conditions of prior sentence.

Mitchell remains in police custody until a trial date is determined.