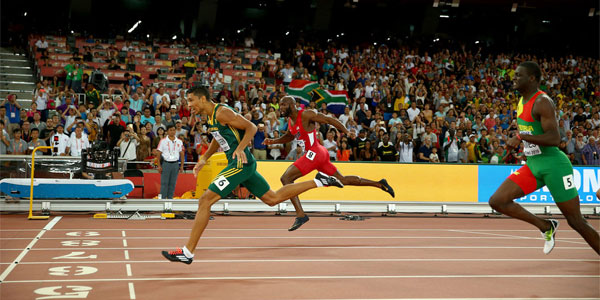 South African sprinter Wayde van Niekerk has a great shot at winning at Rio 2016. Here’s what you need to know.

Wayde van Niekerk won the 400m at the 2015 world championships in Beijing, cementing his place at the top of online sportsbooks lists of favourites for Olympic Gold. It’s arguably not his finest achievement, though: he is the first person ever to complete the trio of running 100m in under ten seconds, 200m under 20 seconds, and 400m under 44 seconds. His victory in Beijing sealed this feat, which he achieved with one of the fastest 400m times in history. In second and third place were the winners of 400m gold at the previous two Olympics, LaShawn Merritt and Kirani James.

Who will compete with Wayde van Niekerk for 400m gold?

At Betfair Wayde van Niekerk is 8/11, suggesting that that at least online sportsbooks in the UK think he will win easily. His closet rival, the Grenadian Kirani James, is 6/4. Incredibly, despite winning the Olympic Gold in 2012 james is actually younger than Wayde van Niekerk. Both 23, and separated by less than six weeks, they are perfectly placed for a fierce completion. Kirani won the 400m at the 2011 World Championships in Daegu, a year before winning Olympic Gold.

LaShawn Merritt’s odds of 9/1 at Paddy Power seem fairly tempting considering that he also broke 44 seconds in the 2015 World Championships. His time of 43.65 seconds was the fastest non-winning time in history! However, he is now 30 and bettors may doubt whether he is capable of maintaining his form. Fans of athletics will hope for a final showdown with the American, Grenadian, and South African, but as of now it seems Wayde van Niekerk is the clear favourite!