Despite increased taxes on online betting profits, bookmaker William Hill has decided to maintain his base in Gibraltar 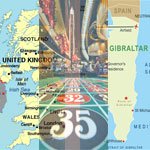 Bookmaker William Hill’s betting business is taking a costly blow due to a recent tax increase on online betting.

Even though Great Britain’s recent decision to increase taxes on bookmaker’s online profits are seriously hurting businesses operating under British gambling laws, betting operator William Hill announced it will maintain its base in Gibraltar.

The new law should apply starting December 2014 and estimates show it could bring in an extra yearly income of GBP 300 million.

Initially, William Hill took their business to Gibraltar in order to take advantage of lower taxes, but the new 15% duty is bound to take a multimillion-pound toll on their future incomes and on profits of all companies dealing with internet betting in the UK.

Even so, the British bookmaker decided to stay put, despite the fact that it has just opened a new office in London’s Tech City. According to iGaming Business, the company was planning on making redundancies at its telephone betting and customer services department in Gibraltar.

Andy Lee, managing director of William Hill Online, denied all rumors regarding the closing of the Gibraltar office: “We have over 400 people in Gibraltar, we run our global operations from there. Our staff are very happy there and there are reasons why we will remain there in order to be competitive in this market.”

Currently, the bookmaker is busy with preparations for next year’s Fifa World Cup in Brazil and planning on developing various products before the event. As the official sponsor of England’s national football team, William Hill will be able to use players for videos promoting the tournament.