Win a Nissan Leaf – one of the most eco-friendly cars in the world by taking part in the Vbet Casino’s Eco Belote. Moreover, you can also win cash prizes of €80,000. 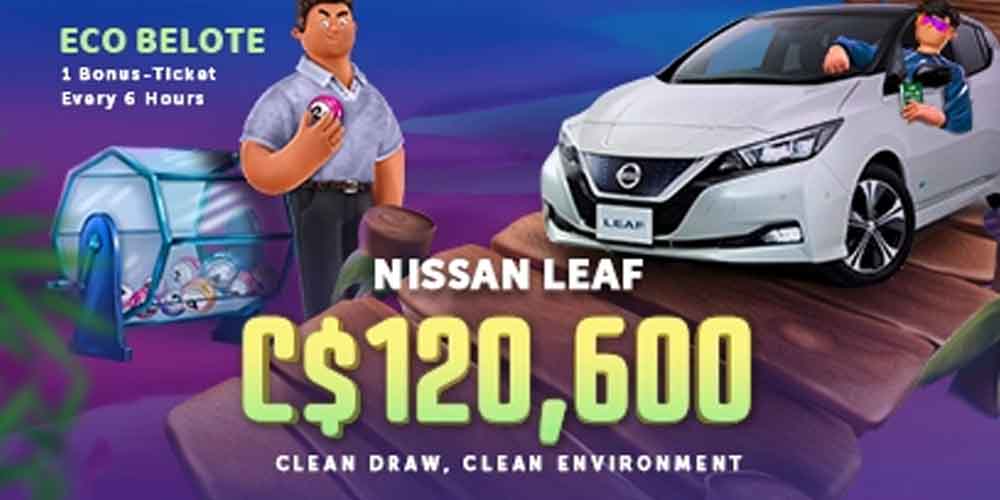 Win a Nissan Leaf taking part in the Vbet Casino’s ECO BELOTE! During the Eco Draw, you will have the opportunity to win €80,000 and the most environmentally friendly car ever – the Nissan Leaf!

The promotion runs from April 1 to May 31, 2021. So, hurry up to join. And the great thing is that you can get unlimited tickets to the draw.

Participate in the draw and win a Nissan Leaf

Note that in order to obtain draw tickets, you must bet and collect points at the Belote and Open Belote Cash Tables. ONE POINT equals ONE TICKET.

The more tickets you earn, the more likely you are to win at the draws.

RULES OF THE 1ST DRAW

During a live broadcast, six balls with numbers 0 to 9 will be inserted into the keno machine. Each time, one number will appear and be compared to the ID numbers of the tickets. Six numbers will appear during the first segment. The numbers match from left to right, beginning with the first and ending with the last. A total of six matching numbers must be registered.

The first €16,000 and the second €24,000 will evenly share all Players who have and report matching numbers.

If no matches register for all six numbers during the contest, the prize fund will evenly share the players who register five matching numbers.

RULES OF THE 2ND DRAW

The final part of the 2nd draw will take place using a keno machine. Only tickets that you received during the second draw will qualify for the grand prize.

During a live broadcast, balls with numbers 0 to 9 will be in the keno system, seven for each number. Each time, one number will appear and be compared to the ID numbers of the tickets, left to right, from the beginning to the end, until no matches are reported.

If no matches register after each of the next numbers, and the previous matches were 10 or more, the number after 0 is canceled, and extra numbers are removed before a match is registered.

The car will win the ticket that records a complete or single match. When there are only 9 or less matches remaining, the tickets that register for any matches will compete in a second round.

Also, check our latest review about Vbet Casino for more amazing promotions and more info about this casino.