Two teams that are likely going to advance to the knockout stages of the 2022 Qatar World Cup are Portugal and Uruguay. The two teams are drawn together in Group H and have faced each other before in the 2018 World Cup. In that competition, the Uruguay national side came out on top with a 2-1 win. This time round, the Portuguese national side have a greater chance of winning. They are tipped by the bookies to come out on top. We take a look at both teams' form, their betting lines and the odds of winning. 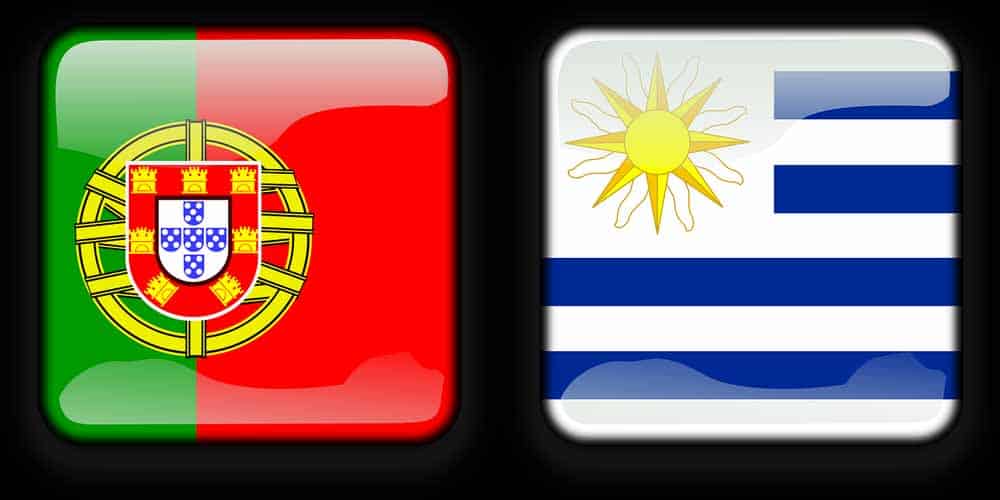 The second fixture in Group H sees Portugal take on Uruguay. It is assumed that the winner of this match will top the group, given as both teams are favourites. The Portugal v Uruguay World Cup odds slightly favour Portugal, but we look at both teams in greater detail. Could Uruguay actually beat Portugal in the fixture and take top spot?

Group H is one of the feisty groups in the 2022 Qatar World Cup. The group includes Portugal, Uruguay, Ghana and South Korea. Two of the teams that are tipped to go through are Portugal and Uruguay. It is difficult to imagine Ghana and South Korea beating either team to the knockout stages. But which team will finish first? This fixture may ultimately decide that.

Over the past week, we have heard several Portuguese players state that they are playing this World Cup for Cristiano Ronaldo. At 37 years old, it is likely to be his last ever World Cup.

Portugal go into the Qatar World Cup with fine form. The national side qualified for the World Cup through a Play-Off round, after finishing their group in second place. Portugal beat North Macedonia 2-0 in the Play-Off final complementary of two Bruno Fernandes goals.

Cristiano Ronaldo is set to become one of the most watched players of the 2022 World Cup. After his recent controversial interview with Pierce Morgan, the Portuguese skipper will become available in the January transfer window. A successful Portuguese World Cup campaign will ensure more club teams queue for the infamous CR7 signature.

One of the most controversial yet exciting teams in national football are Uruguay. With only two million people in their population, the South American side never fail to amaze. They have won the World Cup on two separate occasions – in 1930 and 1950.

Uruguay are going into the fixture knowing full-well that they can top the group. The likes of Luis Suarez, Edison Cavani and Fede Valverde all play for the national side. They have also been put in a group with Ghana, who they infamously knocked out in 2010 following a controversial ending deep into extra time.

The national side finished in third place to qualify for the World Cup along with Brazil, Argentina and Ecuador. They will fancy their chances against Portugal, albeit the European side have a greater chance of winning the fixture. The last time these two sides met was in the 2018 World Cup, where Uruguay knocked out Portugal in the quarterfinals 2-1.

According to online sportsbooks in Qatar, the Portugal v Uruguay World Cup odds favour the European side ever so slightly. Portugal go into the fixture as bookie favourites with odds 2.08. As for the South American side, the odd of them winning the fixture are 3.56. A draw would pay out 3.4 times.

It is more than likely that Portugal will win the match. The team are in fine form and are possible favourites to win the entire competition. However, they have not always shined in World Cup competitions, even with the many great teams they have had in the past. Thus, it may not be worth placing a bet on Portugal, as the odds of 2.08 do not necessarily justify the bet.

A bet on both teams to score seems far more likely. The odds are 1.89, so slightly lower than a Portuguese win. However, if you were to combine the two, a bet on Portugal to win and both teams to score would pay 4.54 times your bet. It is certainly a bold move considering the high odds on a single match.

There are various other betting lines in the match including whether or not there will be a penalty. If there is a penalty, the odds of it happening are 2.88. Other bets include over 1.5 goals for odds 1.35 and over 2.5 goals for 2.13. Both bets are likely to drop given the quality found in both the Portuguese and Uruguayan national side.

There are many betting lines that have different Portugal v Uruguay World Cup odds. However, the ones with the most rewarding odds are riskier but have a greater reward. We would advise players that use a smaller stake to follow the 4.54 odds for Portugal to win and both teams to score. This is a difficult bet but very possible to happen.

Other bets include placing a wager on either Cristiano Ronaldo or Fede Valverde to score. It is also recommended to bet on Uruguay to finish the match with more yellow cards than Portugal. Remember, Uruguay is a nation with the likes of Diego Godin and Lucas Torreira. For more information on the Qatar 2022 World Cup, please look at the Ultimate World Cup Betting Guide.