The Brazil fixture in Group G puts them against Switzerland in the second fixture in a must win match. It is likely that Brazil will come out on top although the Swiss team are most likely going to be the fiercest team they face in the group stage. Thus, it would be unwise to write off the Swiss team completely. In this Brazil v Switzerland preview, we take a look at how both teams are doing, their form and the possible betting lines that can be placed for this Group G fixture. Have a read through for more information. 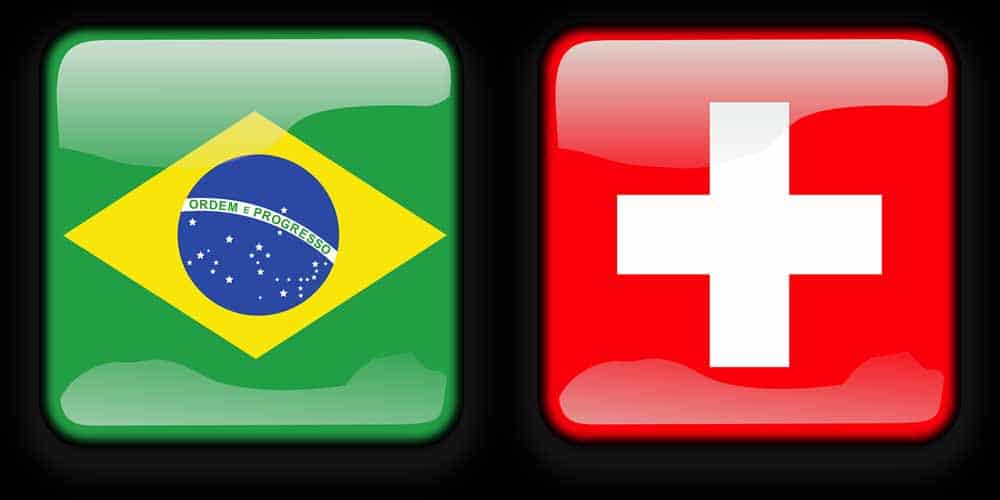 The second fixture in Group G sees the competition favourites, Brazil, take on the Swiss national side. The Brazilian football side go into the fixture as favourites to win, particularly as many bookies back them to go all the way. Our Brazil v Switzerland betting predictions would also back the “A Seleção” to go all the way.

The 2022 Qatar World Cup is rapidly approaching and one of the most hyped-up national sides is Brazil. The ‘Little Canary’ side have won the most World Cup competitions of all time, holding the record of five World Cups. They now find themselves in Group G where the likes of Switzerland, Serbia and Cameroon also feature. Can Brazil win the World Cup, twenty years after their last success?

Will Brazil Win the World Cup?

One of the most in-form national sides in the world is Brazil. The yellow and green football kit has won their last seven matches consecutively. Captained by Thiago Silva, Brazil will fancy their chances as they have one of the best 26-man squads on paper.

The Brazilian national side consists of several superstars including talisman Neymar. They have got unbelievable firepower in Antony, Gabriel Jesus, Martinelli, Vinicius Junior, Casemiro and Rodrigo. In fact, the Brazilian team is that good, that the likes of Roberto Firminho had to miss out. Can Brazil extend their record number of World Cup trophies by adding a sixth before 2023? It seems likely.

Does Switzerland Stand a Chance?

The Swiss A-Team will certainly fancy their chances. They have to, as no one else will. In the previous Euro 2020 competition, Switzerland became the killer of giants. They knocked out France, the team that many backed to win the competition. From 3-1 down, the Swiss team managed to score two goals and bring the scores back level at 3-3. Following a goalless extra-time period, the two teams faced each other on penalties. Yann Sommer, the Borussia Mönchengladbach goalkeeper, saved a penalty from French superstar Kylian Mbappé.

If anyone was to give Switzerland a chance of beating Brazil, the hope rests upon Yann Sommer’s shoulders. The keeper have to continue his fine international form and keep the Brazilian superstars from scoring. If Sommer is on form, there is a chance that Switzerland can avoid defeat.

According to online sportsbook sites in Qatar, Brazil v Switzerland is set to be one of the most intriguing matches of Group G. Brazil go into the fixture the firm favourites with odds 1.45. Switzerland are given odds 7.5 from 22Bet to come out as victors. The odds on a draw are 4.34.

Seeming as both previous World Cup matches have ended as a draw, it may not be the smartest decision to bet on Brazil. The odds of both teams scoring a goal is 1.95. Furthermore, the odds of the match having at least 1.5 goals is 1.25.

Essentially, the Brazilian outfit look as though they are firm favourites to win the match. The bookies have backed them all the way. However, it would be unwise to write off the Swiss national side completely. To play it safe, the best bet would be to place a wager on both teams to score. In doing so, it is almost certain that Brazil will score, so all you have to do is celebrate when Switzerland do.

To conclude these Brazil v Switzerland betting predictions, we believe that both teams have an equal chance of getting something out of this game. Brazil are the favourites if you want to back a team to have the positive result. However, a better bet may be to place on both teams to score. If you want to combine the two, betting on both teams to score and over 2.5 goals comes at odds 2.38. For more information on the Qatar 2022 World Cup, please look at the Ultimate World Cup Betting Guide.