The 2022 Qatar World Cup puts Cameroon versus Serbia in an all-time classic World Cup fixture in Group G. The two teams are likely to battle for the second spot as Brazil are likely going to occupy top spot. In the question of whether Cameroon will defeat Serbia, we cover all the most popular betting lines available for this fixture. It is safe to say that both teams will fancy their chances of winning and look to beat the other in a race to second place. Have a read through for more information. 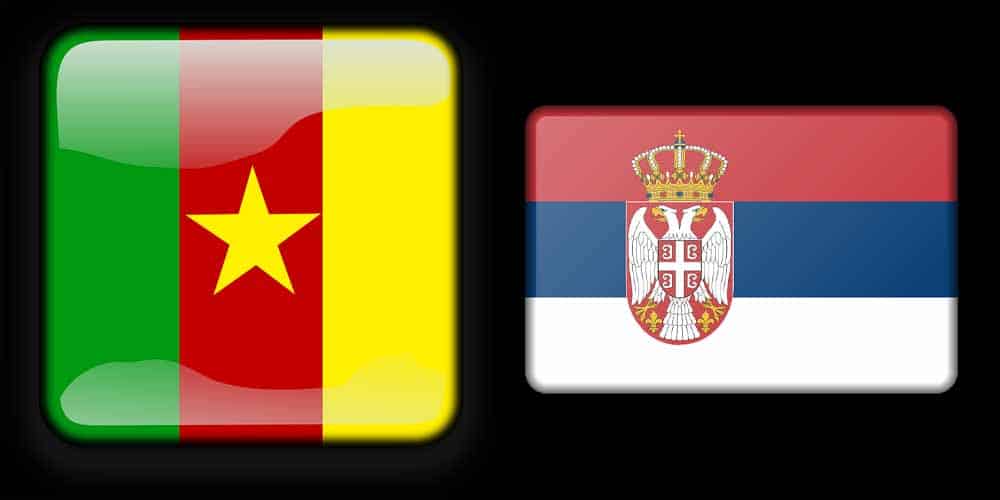 In the second fixture of Group G, the five-time Afcon champions Cameroon take on Serbia in a clash for qualification. One of the feistiest groups of the competition, Group G includes Brazil, Cameroon, Serbia and Switzerland. In this Cameroon vs Serbia betting tips analysis, we see the background behind both teams.

The 2022 Qatar World Cup is just around the corner and Cameroon vs Serbia is one of the big battles that is yet to play. Group G is going to be a fight for second place, assuming that Brazil – who are favourites to win the World Cup outright – claim top spot. It is the second fixture in the group, after Cameroon faced Switzerland and Serbia played Brazil to open their campaign.

‘Les Lions Indomptables’ to come out on top?

The Cameroon national side are known as ‘Les Lions Indomptables’ to their many supporters. That translates to ‘The Indomitable Lions’. Can the lions, captained by the former Porto star Vincent Aboubakar, beat Serbia?

The question is a fair one. The only time Cameroon has ever faced Serbia in the past was a friendly match in 2010. In that match, the team in green, red and yellow narrowly missed out on winning, losing the game 4-3. For the World Cup, they have a better chance of winning, here is why.

Serbia (excluding Yugoslavia) have only ever made it to the World Cup finals on three separate occasions, in 2006, 2010 and 2018. They have never managed to advance to the knockout stages of the competition.

Cameroon, on the other hand, are the most successful nation in Africa at World Cup competitions. They have qualified the greatest number of times and advanced to the Quarterfinals (joint furthest by any African team).

Have the Serbian ‘Eagles’ got a Chance?

Absolutely! The Serbian national team are going into the World Cup on red hot form. Since the start of 2021, they have only lost three times, having played 22 times. In those 22 matches, the ‘Eagles’ have won 13 times. Their current squad is captained by Ajax’s midfielder Dušan Tadić. Their squad also includes goal scorers Dušan Vlahović from Juventus, Aleksandar Mitrović from Fulham, talisman Sergej Miliković-Savić from Lazio and the no-nonsense centre-back Nikola Milenković from Fiorentina.

In this competition, Serbia are yet to advance to the knockout stages and their ‘golden generation’ appear to be hungry to break that record. It is likely that Serbia will advance through to the knockout stages, given their impressive form. Their form has taken down the likes of Portugal, Sweden (twice) and Norway. They topped their qualification group, which featured Portugal among eight other teams.

We do not tend to favour the bookies’ favourite as football can be incredibly unpredictable. However, in this fixture, we cannot see past a Serbian victory. The team is in the form of their lives, with an impressive feat of capturing top-spot in the qualifiers. Cameroon will do well to get anything out of this match as Serbia appear to be the clear favourites.

According to online sportsbooks in Qatar, if you were to bet on the team in form, the return would be 1.72. The African lions have odds 4.98 of winning and a draw between the two nations is listed as 3.38. This is using the popular 22Bet.

It is likely that Serbia will win this match, given their impressive form. However, it is also an option to bet on Cameroon. The nation has far more experience in World Cup tournaments and could use that to their advantage.

As mentioned before, the last time these two teams faced each other, the score ended 4-3. It you can’t split heads or tails between the two, perhaps betting on goals would be better. The odds of betting on both teams to score is 2.13. Furthermore, betting on over 4.5 goals would pay out a handsome 8.5. Perhaps the football gods have a classic high-scoring exciting game in store for us. If so, the odds on over 6.5 goals (like the last time they faced each other) is 18.

It is difficult to pick a winner from these two teams, as you have seen in our Cameroon vs Serbia betting tips. The obvious choice is Serbia, given their impressive form. However, it may not be wise to write off Cameroon as they are far more World Cup savvy. If you are still unsure what to bet on, have a read through the ultimate World Cup betting guide as this could sway you towards picking a winning bet.