Canadian player wins a seat at the most expensive poker tournament, the World Series of Poker Big One for One Drop. 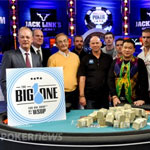 The seat at the unique poker tournament is valued at one million dollars with most of the impressive buy-in donated to solving water crises in the third-world countries. The event will take place in July and is a part of the WSOP calendar.

The latest satellite took place in full compliance with Canadian gambling laws and saw a lucky player, Carlos Nahas, from Montreal competing against other 57 participants. The field included Scott Montgomery, Mike McDonald, and Laurence Grondin. The competition climaxed in a six-hour heads up between the winner and JC Ferreira.

The $25,000 Grand Tournoi de Poker Loto-Quebec event took place at one of the most frequented Canadian poker rooms and was sponsored by the likes of Cirque du Soleil and One Drop charity founder Guy Laliberte, and Caesars Interactive Entertainment CEO Mitch Garber.

Canada gambling news reports that Carlos Nahas didn’t even qualify for the $25,000 event, but played on behalf of his friend who won the entry on an online slots promotion, but doesn’t feel comfortable playing poker.

In July, when the Big One for One Drop event is scheduled to take place, Carlos Nahas will literally compete for millions of dollars, which will remain in the prize pool after the donations to the charity will be made. So far over 30 poker professionals have committed themselves to the tournament and the whopping buy-in.