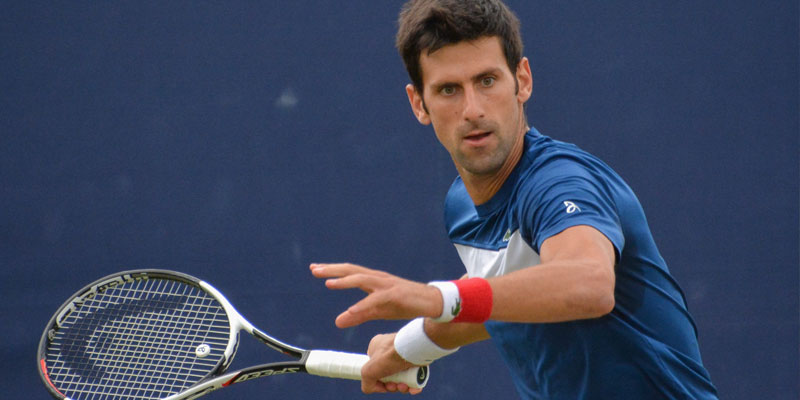 The most prestigious tournament of the year, the Wimbledon Championship has just started. It runs between July 01 – 14 at the All England Club in London. According to 2019 Wimbledon Men’s winner predictions, Novak Djokovic is the favourite to reign again. However, he might face a strong challenge from rivals like Roger Federer and Rafael Nadal.

The summer’s biggest tennis event features all the world’s best players, with some young prospects who might do well. Online sportsbooks in France expect the defending champion Novak Djokovic to land his fifth crown in London. However, the eight-time champion Roger Federer and two-time winner Rafael Nadal are also tipped to reach the finals. Among the dark horses to make a surprise are Felix Auger-Aliassime, Milos Raonic, and Marin Cilic.

Novak Djokovic won the Wimbledon Championship four times in his career. He also won an overall 15 Grand Slam tournaments, looking to add the 16th title at the 2019 Wimbledon. Djokovic enjoyed a great success in the span of the last 12 months. He won the 2019 Australian Open, the 2018 US Open, and the 2018 Wimbledon. With such impressive success, Djokovic makes sense as the odds-on favourite with a value of 2.10 at Bwin Sports.

In a complete year of Grand Slam tournaments Djokovic registered only one single loss. In addition, among 27 wins he had only two difficult matches. The 32-year-old Serb is just at a whole different level. Therefore, it seems very hard to find reasons to bet against him.

The swiss champ has picked up three tournament wins in 2019 with victories at Dubai, Miami, and Halle. His most career success has been registered at Wimbledon, with a total number of eight wins since 2003. Federer will be looking to add his ninth win, with a value of 4.00 at Bwin Sports. If you are a fan of the Swiss Maestro, do not hesitate to choose him among your 2019 Wimbledon Men’s winner predictions. He is considered a legitimate force to earn another win in the Grand Slam event.

Last time Nadal was just points away from beating Djokovic

The Spaniard is coming from last month’s 12th French Open win, bringing his career Grand Slam total to 18. However, he is less dominant at Wimbledon, as he did not make it past the fourth round from 2012 to 2017. Yet, that will not stop the 33-year-old Rafael Nadal from playing at a high level and eyeing on a victory at Wimbledon. Last time, Nadal reached the semi final and was just points away from beating Djokovic. Will he do well this time? Probably yes, but it is unclear how far he will progress. Should you bet of Nadal to win the title, the odds are 7.50.

Auger-Aliassime, Raonic, and Cilic to have strong showing

It has been a while since anybody other than Djokovic, Federer, and Nadal won a Grand Slam. And, when it comes to Wimbledon, those three are the only ones who have won the title since 2003. According to online sportsbook news in France, only Andy Murray won Wimbledon over the 16-year span. Yet he is not in the field this year.

However, that does not mean that there will be no surprises. On the contrary, the 18-year-old Canadian Felix Auger-Aliassime (26.00) is expected to have a strong showing. Milos Raonic (29.00) might also pose a threat. He reached the final in 2016, only to lose against Andy Murray. Among other potential dark horses is the Croatian Marin Cilic, the only player to win a Grand Slam in the last decade. He won the US Open in 2014, and he hopes to have a success in London with 29.00 odds.