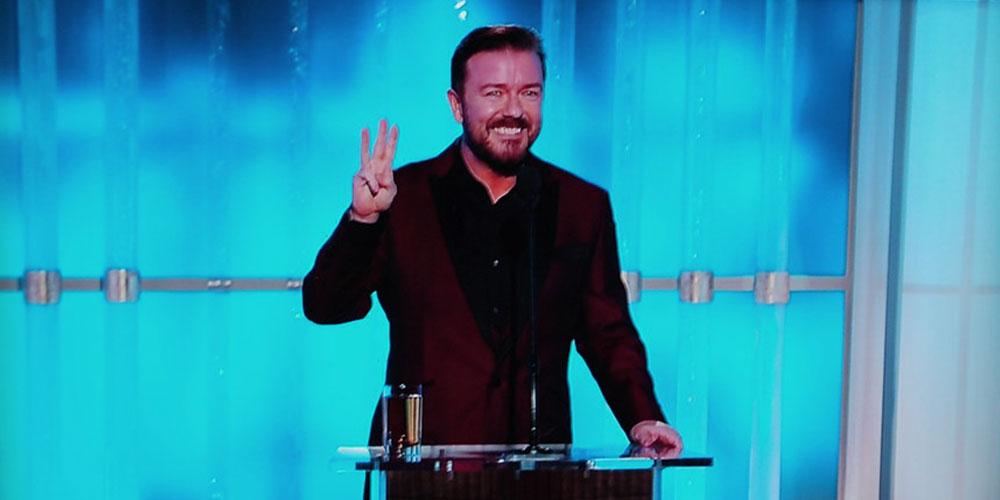 The Golden Globes 2020 will take place in California’s most posh area, Beverley Hills, on the 5th of January. Ricky Gervais will be hosting the 77th Golden Globes for the 5th time. The year is ending with some exceptional movies to have hit the big screen. Big shot directors namely, Quentin Tarantino, Martin Scorsese, are a part of this year’s award race, naturally raising the stakes. 2020 Golden Globes best motion picture bets include top names from the comedy and musical genre of the year.

Golden Globes is always considered to be of massive importance essentially due to the way the winners are selected. There is voting between 90 international journalists from the Hollywood Foreign Press Association; which is why the awards are well-respected among the film community. The top films from this year are all tremendous and range from different genres. One of these genres is comedy and musicals, which is the delightful entertainment films have to offer the viewers.

Essentially Golden Globes nominations are quite similar to The Academy Awards. Hence, the Golden Globes apparently sets the precedent for the Award season. The nominations came out on the 10th of December for the categories and the many speculations came to an end. With the nominees known, let’s dive into the discussion regarding which movie has higher odds of taking the trophy home.

Among many praises for Tarantino’s film of the year, Once Upon a Time in Hollywood, applause for Taika Waititi is definitely more audible. Especially if you consider the online gambling news in the US. The movie is based on the novel by Christine Leunens ‘Caging Skies’ which may differ in tone; the book has a somber tone than the movie. Waititi has previously received praise for his Marvel comedy, Thor: Ragnarok. Jojo Rabbit has already been gathering quality reviews by critics and ranks 8.1 on IMDb and 79% on Rotten Tomatoes.

Jojo Rabbit is based on the events of World War II, and how the infamous Nazi rule was prevailing in Germany and in the hearts of its citizens. In the midst of the war, we live the tale through the eyes of a young boy nicknamed Jojo Rabbit. Jojo is a feisty young boy who strongly believes himself to be a Nazi, without knowing the hard truths behind the propaganda. To top things off, he has an imaginary friend none other than Adolf Hitler, portrayed by Waititi himself. Further in the story, Jojo uncovers that his single mother hid a Jewish girl to protect her from the regime, and is torn between what his country is preaching than the simple truth that Jewish people are no different than himself or his friends.

Hence, the story about finding friendship in most unfortunate places and how allowing yourself to give chances to people can change your entire belief system. Jojo Rabbit is currently leading with odds of 1.80 at 1xbet.

Once upon a time in Hollywood, Tarantino’s award ladder

Quentin Tarantino is back with his 9th film about the ‘golden’ days of Hollywood. Famous for his passion for films ventures into the most inspiring time in film era- also one of the darkest. Whilst the movie being a fairy tale ode to love letter, Tarantino did not shy away from bringing the ugly side to the screens as well. The infamous Charles Manson cult diaries found its way into the film with the entry of Sharon Tate. Anyone who is enthusiastic of Hollywood prime time, would have come across the gruesome murders of the Tate LaBianca murders.

Much like Jojo Rabbit, Once Upon a Time in Hollywood invites the audience to share laughter while depicting a rather horrifying reality of the events. However, the movie genre falls in comedy which is mainly due to the character of Leonardo DiCaprio and his movie stunt double/best friend, Brad Pitt. The two actors, charismatic of course, indulge in comic relief to present a rather light movie. Famously associated with changing true events to fit the timeline of his story; Tarantino keeps the tradition alive by producing a completely different ending note.

The movie currently rates at 7.9 at IMDb and 85% at Rotten Tomatoes. Online gambling sites in the US, namely 1xbet provide odds for the movie to win the Golden Globe at 2.00.

After Bohemian Rhapsody, Rocketman is based on another all time legend at the music front- Elton John. Director Dexter Fletcher passionately depicts the biopic of one of the Rock legends. Reginald Dwight was a child prodigy at piano who was a gifted musician from a young age. The life of Elton John from his time in rehab is where the movie starts from and how the musician suffered from various addictions.

Although the movie has reminiscent of Bohemian Rhapsody and the acting of the last Oscar winner for best acting Rami Malek, for his role as Freddie Mercury. On the other hand, Taron Egerton who plays Elton John, has been garnering praise for his role and somehow stands in his own separate spotlight.

Rocketman holds an equal if not more ratings in the film world, than its category nominees. With a rating of 7.4 on IMDb and 89% on Rotten Tomatoes. 1xbet provides odds for this movie at 6.00 to win the Golden Globe motion picture in the musical or comedy genre.