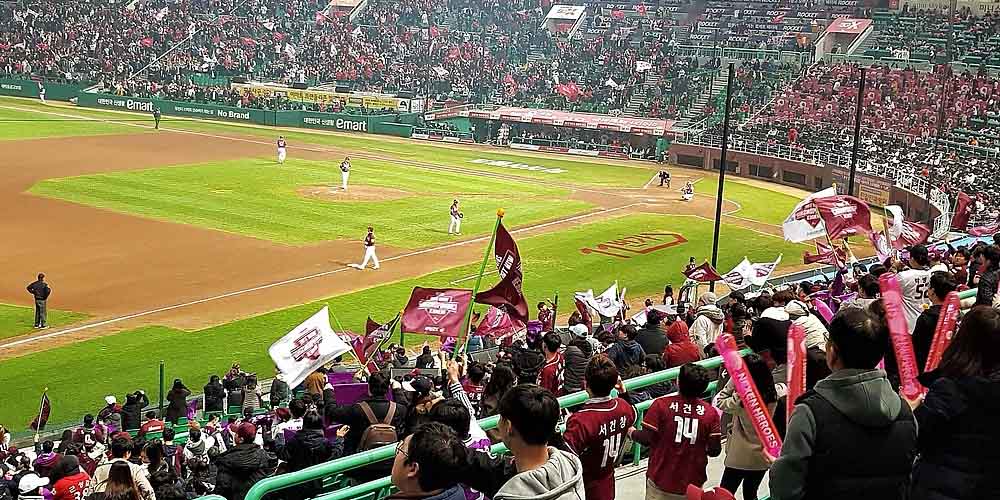 The regular season for the highest level of baseball in South Korea is already in full swing. For those who are new to the Korean baseball league, expect action-packed baseball featuring home runs (with plenty of bat flips), former MLB players, and Korean-born stars looking to follow the likes of Hyun-Jin Ryu and Ji-Man Choi from the KBO to major league stardom. So check out which teams are likely to take the championship this year with 2020 KBO Betting Predictions.

The most popular sports league in South Korea, the KBO League was founded with six franchises in 1982 and has since expanded to ten. More than 200 Americans have played in the KBO over the league’s history. Current and former KBO players have also come from other countries including the Dominican Republic (with more than 80 players), and Venezuela (with over 20).

KBO has become a substitute for baseball starved fans

While still waiting for a start to the 2020 MLB season, baseball deprived fans in the USA have been looking to South Korea, where the KBO has been playing live games – without fans in the stadiums – since May 5. So to keep millions of fans who are hungry for baseball’s stateside return happy, ESPN has been airing six live KBO games per week. However, live games are typically aired between 1 a.m. and 5:30 a.m. ET, so fans who want to catch live action might need to alter their sleeping schedules a little. Sleep-deprived fans can, of course, also stream the games anytime on the ESPN App. And if you’re itching for the chance to bet on the baseball season, check out Online gambling sites in Korea and see what wagers are available. You can also read here about a recent past-post betting mix up involving the Korean baseball.

Differences between KBO and the MLB

The KBO is significantly smaller than the MLB having only 10 professional teams, compared with the MLB’s 30. As such, the league’s playoffs are also shorter, with only five KBO teams making the postseason. The teams also play relatively close to one another,  so fans travel to one another’s stadiums. This makes for some pretty intense rivalries, and there is always a lot of energy in the stadium during games. Doosan and LG Twins even share a stadium in Seoul, amplifying the rivalry even more. The Kia Tigers, located in the southwestern city of Gwangju, are widely considered to be the equivalent of the New York Yankees in the KBO, having won 11 championships, unmatched by any other team. 2020 KBO Betting Predictions, however, show two other sides as favourites this season.

KBO games are usually known for providing a raucous atmosphere. High spirited and vocal fans cheer loudly while beating on drums and chanting their team’s fight songs. And it is also known for the widespread practice of bat flips by hitters celebrating after stroking what they think will be a home run. In the U.S., players sometimes face repercussions for bat flips as some traditionalists see it as disrespectful to the pitcher. In South Korea, however, the practice doesn’t have a negative connotation like it does in America. Some KBO bat flips have even gone viral on social media in the U.S. over the years, and the practice is slowly starting to show up more in American baseball. You are also much less likely to see players arguing with umpires in the KBO than in the MLB, where players and coaches are regularly ejected from games for aggressively disputing umpire’s calls.

2020 KBO Betting Predictions – who is favourite to win the championship?

The NC Dinos 3.18 continue to pace the KBO with a 39-19-1 record, maintaining their stature as the team to beat in Korean baseball. Last season’s Korean Series runners-up, the Kiwoom Heroes 4.0, are next on the odds board. One of the hotter teams over the last few months, they will also get a boost now that former MLB all-star Addison Russell, the former Chicago Cubs All-Star shortstop, has received his work visa and can join the team. The Doosan Bears 5.95 are the defending KBO champions and have also won the KBO Championship in three of the last five seasons (finishing in second place during the other two years). After a bit of a rough patch against the Heroes and Dinos, they have made a comeback to remain third on the odds board.

The most popular KBO futures bet is selecting the winner of the Korean Series Championship, a seven-game series that takes place after the regular season between the top five finishers in the league.  Odds for this particular bet usually come out soon after the end of the regular season. So if you are one of the many looking to find baseball betting action with the 2020 MLB season still on hiatus, check out online sportsbooks in Korea to see what other KBO markets are available. And while not every online sportsbook will take bets on the KBO League,  good sportsbooks such as KTO Sportsbook are now finally taking bets for the upcoming restart of Major League Baseball.