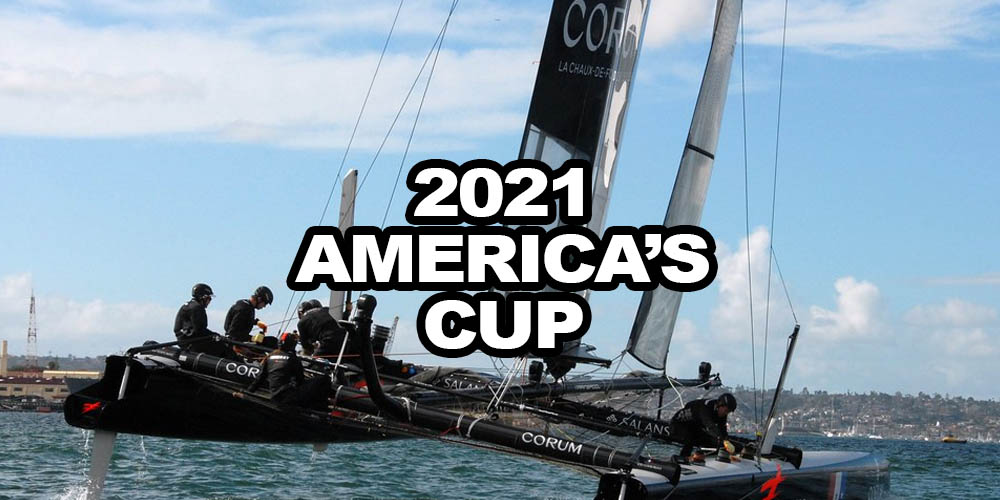 Excitement is building as the oldest trophy in international sport, affectionately known as the ‘Auld Mug’, returns from March 6 – 21 2021 in Aukland. In 2017, the 35th America’s Cup took place in Bermuda, with Emirates Team New Zealand eventually lifting the trophy. 2021 America’s Cup betting predictions for number 36 favour them to repeat their success next year.

America’s Cup teams are finally returning to the water after the recent unfortunate pause in racing. Indeed, four teams will soon have their new boats in action, flying across the waves on hydrofoils at heart-stopping speeds. The America’s Cup is widely recognized as the pinnacle of sailing, with fierce international rivalries producing a spectacular sailing competition. Some experts even believe the 36th America’s Cup could generate up to $1 billion for New Zealand’s economy, through the growth of global tourism and the creation of new business links.

The Kiwis have decided 2021 will see a return to monohulls

The America’s Cup is the oldest international sporting trophy in the world, dating back to 1851. 2021 America’s Cup betting predictions also reflect why some believe it is one of the most unfair. The cards are stacked heavily in favour of the Defender, who is guaranteed a place in the final match. They also choose the venue for the next regatta, and can dictate many of the rules for the ensuing race. This Protocol is agreed upon by the Defender and the Challenger of Record, the winners of the Prada cup. You can read more about how the 2017 event played out for the current Defender here Are The Kiwis A Safe Bet On Sailing In The America’s Cup? And are you looking for other opportunities to bet on the sailing calendar? Online gambling sites in New Zealand with give you bets on this and other regattas.

And as always, new technology, design, and innovative thinking will be a big part of the cup. This year will mark a return to monohulls, with the AC75 Class. Burns Fallow, Emirates Team New Zealand sail designer, claims the original idea for double skinned mainsails in the AC-75 style came during a 20-minute brainstorming session shortly after the America’s Cup win in Bermuda. Along with challenger of record Luna Rossa, they have now provided the framework for each team to develop their vessels. He said “Hopefully it will prove to be practical and fit for purpose. I would love to see it trickle down into uses outside the America’s Cup, because it was an exciting thing to be part of. But I don’t think the take up outside of the AC75 will be immediate.” So expect something new in terms of design, and let’s hope performance too.

Royal New Zealand Yacht Squadron, and their representatives Emirates Team New Zealand, took the honors in 2017. 1xBET sportsbook is currently giving them odds of 1.55. After all, they are already in the final. They also were jointly responsible for deciding what type of vessel would be raced in 2021. In sports such as sailing, however, it pays to expect the unexpected. Equipment breakdowns, collisions, capsizes, or even losing track of the mark or laylines under pressure can all happen. So who are the other contenders?

Team Oracle, USA 3.74 already have a history of success. They won the 33rd America’s Cup regatta in 2010, representing the Golden Gate Yacht Club. They then also successfully defended the 34th America’s Cup in 2013. Having missed out in 2017, you have better odds and a bigger payout should they succeed in lifting the trophy once more.

Land Rover BAR 5.0 is a British sailing team based in Portsmouth, England. The team was established in 2012 with the specific purpose of bringing the America’s Cup to the UK in 2021. The team has already competed in America’s Cup World Series races to develop experience and generate interest from sponsors. Sir Ben Ainslie, one of the most successful Olympic sailors in history, will skipper the boat.

Completing the four team line up is Luna Rossa Challenge 9.0. An Italian sailboat racing syndicate first created to compete for the 2000 America’s Cup, they are the Challenger of Record for the 36th America’s Cup. The team has yet to win an America’s cup final, however. Check Online sportsbooks in New Zealand to keep an eye on how odds may change before the race begins next March.