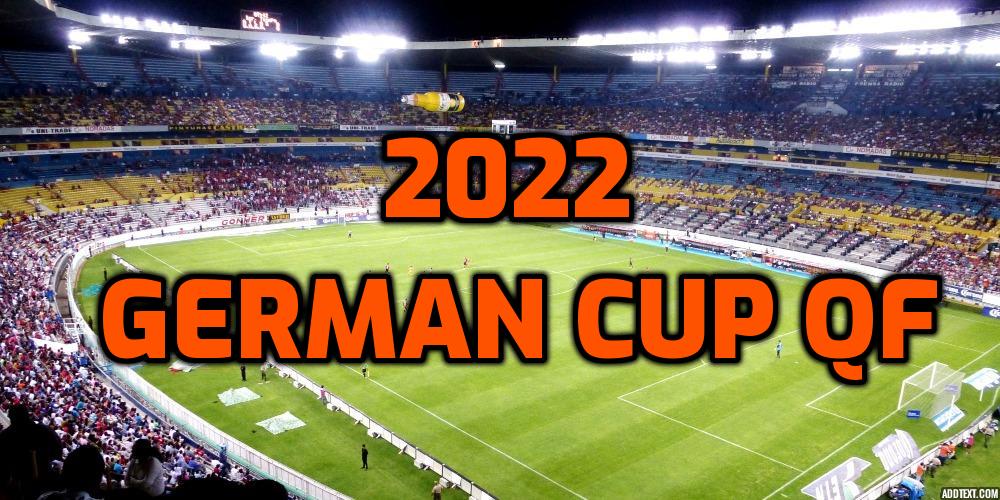 Four teams are left from both the first and second-tier of German football in this season’s DFB-Pokal. One team from the 2. Bundesliga will definitely reach the semi-finals after the Hamburger vs Karlsruher tie. While the 2022 German Cup QF betting preview favors the remaining Bundesliga teams to go through from the other three matches.

The 2021/22 German Cup already has some surprising results. Like Bayern Munich’s 5-0 defeat against Borussia Monchengladbach who have been also knocked out since. After second-tier Hannover 96 beat them 3-0 in the last 16. The defending champions, Borussia Dortmund are also out after losing against another second-tier team, FC St. Pauli in the previous round. Actually, we can find four teams from 2. Bundesliga in the last eight teams, which has only happened once before, in 2004. Then Alemannia Aachen managed to get to the final but was beaten there by Werder Bremen. Now another team might achieve a similar result if it can beat Bundesliga rivals. Like the 2021 DFB-Pokal runners-up RB Leipzig who have become the biggest favorite to win the cup this season.

The first quarter-final is held next Tuesday, on the 1st of March between Union Berlin and FC St. Pauli. The Bundesliga team knocked out their local rival, Hertha Berlin in the previous round with a 3-2 win. Urs Fischer’s team stands in fifth place in the Bundesliga and has been in great form all season. They are favored to win at home against second-tier St. Pauli with the odds of 1.89. But the home team can’t underestimate the guests who knocked out last year’s cup winners, Borussia Dortmund with a 2-1 victory. But since then they only got one win besides two losses and one draw in the second league.

The other team from Hamburg, Hamburger SV will host another second-tier team, Karlsruher SC on Wednesday night. The home team is currently in second place in the table with a chance of getting promoted. They knocked out 1. FC. Koln in the last 16 after winning the penalty shoot-out 4-3. While Karlsruher had an easier job to win against third-tier club 1860 Munchen. Online sportsbooks in Germany favor HSV to get the win with the odds of 1.75 in their 2022 German Cup QF betting preview. The guest’s odds to advance to the next round are 2.89. In their previous meeting last November, the two teams finished with a 1-1 draw, just like the game before. Now one of them must win to reach the semi-final and have a chance of winning the cup.

Freiburg and RB Leipzig can get to the semi-finals

A tight game is expected between the two Bundesliga sides, VfL Bochum and Freiburg on Wednesday night. The home team is in 11th place on the table which is not a bad result in their first season back in the top league. Thomas Reis’ team won 3-1 against Mainz in the cup and can also surprise Freiburg.

Just like they did in November when Bochum won 2-1 with the goals of Polter and Pantovic. But it won’t be easy against Freiburg who have been having a great season and standing in 6th place in the league. In addition, Christian Streich’s team also knocked out Hoffenheim with a 4-1 win playing away. Their odds to win again are 2.37, while Bochum’s odds are 2.89 for the same result.

Online gambling sites in Germany highly favor last year’s cup finalists, RB Leipzig against second-tier Hannover 96 in the last quarter-final. Even though Leipzig haven’t been that convincing this season. And their head coach, Jesse Marsch was sacked in December. But under new coach, Domenico Tedesco the team has been playing much better and won most of their games. Their opponent, Hannover don’t have such a good record after standing only in 12th place in the second-tier. But they managed to knock out Borussia Monchengladbach in the last 16 with a 3-0 victory. Winning against Leipzig can be a difficult task for the team in spite of playing at home.