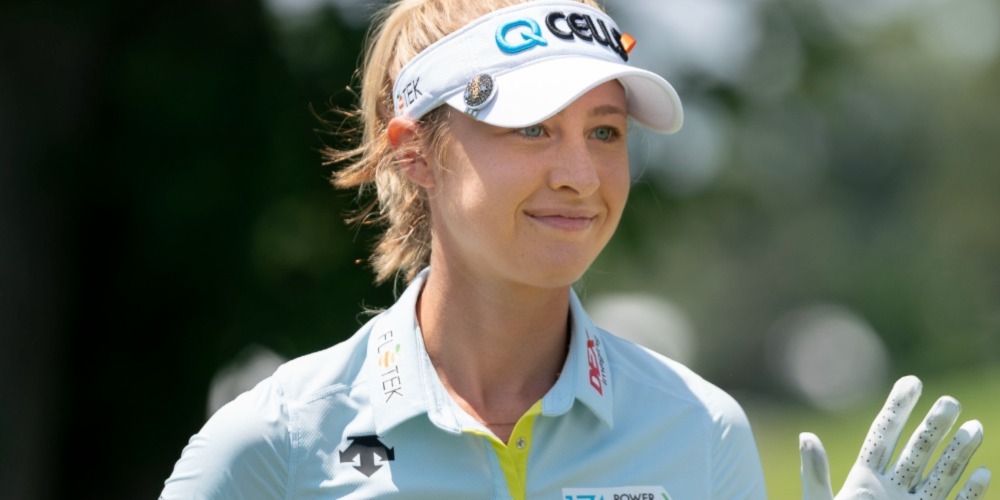 The 2022 LPGA Tour continues this weekend with the Meijer Classic at Blythefield Country Club, in Michigan. The 2022 LPGA Meijer Classic predictions mention the defending champion, Nelly Korda, among the main favorites. Just like world No3 Minjee Lee and world No4 Lydia Ko, with both players having a great season so far. But it will be a tough task to win the tournament for any of them in the super-strong field.

This will be only the eighth edition of the Meijer Classic tournament, which was founded in 2014. South Korean Mirim Lee won the first event, but we can also find in former winners Lexi Thompson, Kim Sei-young, and two-time winner Brooke Henderson. All of them will compete this year along with the defending champion, Nelly Korda. This is not surprising as the event offers the last opportunity to play before the third major of the season, the 2022 KPMG Women’s PGA Championship.

The tournament is played at the Blythefield Country Club, in Michigan. The course was designed back in 1928, but it went through a whole restoration in 2020. At this tournament, the club’s driveaway is named after last year’s winner. So now it’s called Nelly Korda Drive, let’s see whose name can be used next year.

Ko, Lee and Korda Are the Top Favorites In the 2022 LPGA Meijer Classic Predictions

Lydia Ko has been in great form all season and leads the odds in the 2022 LPGA Meijer Classic predictions with +1000.00. The New Zealand golfer won the 2022 Gainbridge LPGA at Boca Rio at the beginning of the year which was her 17th LPGA Tour wins. She also finished in the top 5 in her last four appearances, including a fifth place in the US Women’s Open. Ko finished third at Blythefield in 2018. But based on her recent form she can get an even better result now. Just like 2022 US Women’s Open winner Minjee Lee who has the same odds to win the tournament.

The world No3 also won the Cognizant Founders Cup last month and finished T2 in the HSBC Women’s World Championship in March. The 26-year-old Australian hasn’t got such great results in this tournament yet. Her best result has been a T16 finish in 2019. But she can surely improve on this record now. Online sportsbooks in the US expect a good performance from the defending champion, Nelly Korda too.

They offer the odds of +1100.00 for her victory. Despite this event being only her second tournament since her return following her surgery to remove a blood cloth. In the first one, at the 2022 US Women’s Open, she finished T8. Now the world No2 can get back to winning ahead of another major.

Henderson, Thompson, and Other Possible Winners

Brooke Henderson has already won the Meijer Classic twice before, in 2017 and 2019. The Canadian arrives in top form after winning the ShopRite LPGA Classic last weekend. It was her 11th LPGA Tour victory and first win of the season. The world No8 had some weaker tournaments before when she didn’t cut. But she is likely to perform well again on one of her strongest courses. Her odds to win again are +1600.00. Online gambling sites in the US offer the same odds for the victory of another former event winner, Lexi Thompson.

The 27-year-old American finished twice as a runner-up this season. At the LPGA Drive On Championship in February and last month at the Cognizant Founders Cup. Thompson won in Michigan in 2015 and finished in the top 5 three more times. The world No5, Atthaya Thitikul had a disappointing US Women’s Open after finishing only in T24.

Now the young Thai player is one of the rising stars of the sport following her first LPGA win at the 2022 JTBC Classic. Her odds to win again are quite high though with +3000.00. Just like the odds of last year’s runner-up, Leona Mcguire. The Irish player also got her first LPGA Tour to win this season, at the LPGA Drive On Championship. Now her odds to repeat this success are +5000.00 on BetOnline.