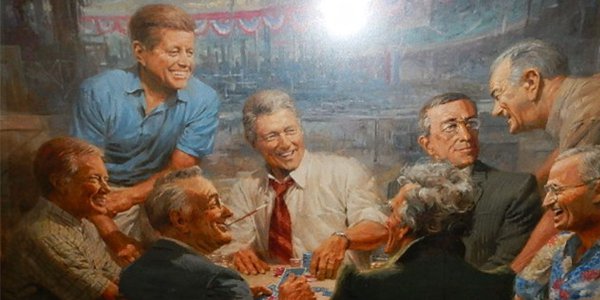 A review of some U.S. Presidents caught a spell of gambling fever

In the history of the United States, has always been at the forefront. Lotteries built University and Founding Fathers gambles. It was said that Thomas Jefferson kept a close tally of his card playing success. President Andrew Jackson was said to have shot a man over a gambling debt. Although gambling was never condoned, there have been few leaders who’ve never escaped its appeal. Now we will look at some.

• Ike learned poker, and the math behind it, at a young age from frontiersman
• Harding wagered all of the White House china on poker in one evening
• Barack Obama often held bi-partisan poker games as an Illinois Senator

Honorable mention should be given to the current U.S. President Barack Obama. In 2008, few punters working within UK gambling laws would’ve predicted the new president to win the Nobel Peace Prize. Having already a reputation for liking poker, many had hoped he would legalize online poker. Regardless, the first avid poker player since Nixon often held bi-partisan poker games as an Illinois Senator.

Richard of Nixon and Warren of Harding maketh the list

Richard Milhouse Nixon was one of the most controversial Presidents in the history of the United States. In all fairness, he had to be in charge during one of largest transformations in the America which witnessed civil rights, women’s rights, gay rights and the Vietnam War. He had a penchant for dropping information ranging from slain civil rights leader to Alien corpses in an effort to simply get a reaction.

Tricky Dick was drawn to the cards while he was in the Navy. Winning USD 6,000 Nixon, took his winning and invested in his first congressional election which he won. As he made his way to claim the Presidential title, Nixon used his bluffing ability to gain the confidence of his constituents. Unfortunately, his efforts to get guarantee his next election failed after being caught for taping conversations of political rivals

Richard Nixon is the 37th US president.  (Photo: Neatorama)

Warren G. Harding was considered one of the most useless presidents in the country’s history. It’s been heavily accepted that the Harding was able to win his election based on his height, good looks and charisma. Fortunately his presidency (1921-1923), after World War I and before the Great Depression, didn’t require a lot of responsibility. Having suddenly collapsed and died, Harding was unable to finish his term.

Harding was a mad gambler. Poker and golf may have made him broke had he not died so soon. The man bet on every game of golf he played. His cabinet was dubbed the “Poker Cabinet” because he would always play poker with them. His most famous exploit was legendary. In an act of desperation, Harding wagered all of the White House china on poker and lost making the biggest gambling news in his career.

Ike and Truman loved their poker as well

Dwight D. Eisenhower rose to prominence during the Second World War. He was a five-star general who was Supreme Commander of Allied Forces in Europe. Having planned and supervised U.S. invasions in North Africa and Normandy, Eisenhower was a war hero who also became the first supreme commander of NATO. As the 34th President of the U.S., Ike ended the Korean War, ousted the democratically elected leader of Iran and started the space race.

He was also, a complete “bad ass” when it came to poker. Being the last president born before 1900, Ike learned poker, as well as the math behind it, at a young age from frontiersman. At West Point Military Academy, Ike dominated his classmates. He seldom lost at the game and even after winning the presidency in 1953, continued to play poker throughout his eight-year term.

Harry S. Truman had the near-impossible task of replacing Franklin Delano Roosevelt, the architect of the New Deal and Social Security. Truman literally ended the war by approving the use of atomic bombs against Japan. Also, Truman passed the USD 13 billion Marshall plan to help rebuild Europe. He was also responsible for giving the executive order to racially integrate the military and federal agencies.

Like his predecessor, Truman loved poker and kept it in the White House. His favorite poker venue was the presidential yacht. It was there, that Truman would invite various politicians and members of his staff to play. Among these guests, was the Lyndon B. Johnson, Kennedy’s vice president and future 36th president of the U.S. Considering the players, many of those yacht games would make U.S. gambling news for sure.