An Extensive Betting Guide to the Copa America

News >An Extensive Betting Guide to the Copa America 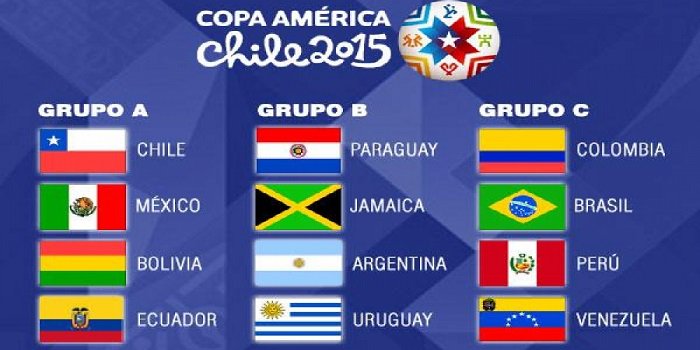 This summer’s major betting event regarding soccer could fit gamblers, as top teams slips rarely at the group stages.

This will be the 44th edition of the South American football championship. The Copa is usually organized once in every four years, and it will be held in Chile this time. Apart from the ten CONMEBOL nations, Jamaica and Mexico were invited to participate in the event, bringing up the number of teams to twelve, as usually is the procedure before this tournament. This will be the first time Jamaica takes part in the competition, while Mexico are regular invitees.

• Messi and co. are favorites
• Argentina v Brazil in the semis?
• Lucky path for Chile

The teams are divided to three groups, and a round-robin tournament will be played in each of those, with the best two teams and the two best third placed teams advancing to the knockout phase. Though US gambling laws varying from state to state, for those who live in a place with legalized sports betting, this tournament will be a great opportunity to make some money while watching soccer games.

Group A: Chile and Mexico to advance

The match between the hosts and the invitees from CONCACAF will be the highlight of this group. Chile was a popular side at the last two World Cups playing excellent attacking football, and with having an advantageous draw and ranked as third favorites at most online betting sites, they have reasonable chances to win their first ever Copa America title. They are favorites to win this group, where Copa veterans Mexico, finishing twice second and three times third previously, have the best chances to finish second.

Ecuador and Bolivia were drawn to this quartet too, and while the former team qualified regularly for recent World Cups, Bolivia faded to a football nonexistence since finishing as runners-up at the Copa in 1997 on home soil. The game between the two teams might be easily the worst one in this competition, as neither of those are known from their spectacular football. Chile should beat them both, while Ecuador can cause some problems to Mexico, and make a bid for a third place advance anyway.

Title holders Uruguay will face top favorites Argentina in the second round in a match that will be arguably the biggest battle in the tournament. Argentina seems to be cursed since winning the Copa in 1993 – they even missed the semifinals last time on home ground. However, with attacking genius Lionel Messi, who led the team to the World Cup finals last summer, they have the best chances to win this competition, according to online sportsbooks in the US.

Though defending champions and the most successful team in the history of the competition, Uruguay ranked only fifth at online betting sites. They might be over their peak now with last Copa’s top player Diego Forlan retired from international football. Their draw is also quite harsh with a probable meeting with Brazil early in the knockout phase. Yet with Barcelona star Luis Suarez in their team, La Celeste should easily reach the knockout phase beating outsiders Jamaica, clearly the weakest side in the group.

However, Uruguay could struggle in the rematch of the last final against Paraguay, a team having a very long history of getting draws against stronger sides by disciplined, ultra-defensive play in unbearable games. Even without knowing the line-ups, placing a wager on a 0-0 or a 1-1 draw and Paraguay’s third place advance is anything but a reckless move. Jamaica collecting more than one point in this group would be a surprise.

Brazil and Colombia met in the quarter-finals of the World Cup last summer, in a game that saw more professional fouls and disgusting challenges than any at this level recently. However, their clash could be the feast of brilliant football this time, as they should reach the top two places in Group C easily, whatever happens in the match played between each other. Neymar and co. are second favorites to win the tournament behind Argentina, while the majority of the mobile betting operators rank James Rodriguez and friends as fourth favorites. This can be an early final and it would not come as a big surprise if the two would meet again in the actual title decider.

Peru are in this group too, who finished in third place four years ago, in front of Brazil and Argentina – that was the first time when neither of those giants were able to make it into the semis. And Peru finished just ahead of Venezuela, the fourth member of the quartet, by beating them 4-1 in the third place match. It is funny but if we listed the teams by their last Copa results, we would get this ranking: 1. Peru, 2. Venezuela, 3. Colombia, 4. Brazil. The outcome of the group will be hardly similar to that, as obviously Brazil and Colombia might decide the first two places between each other. If Peru managed to beat Venezuela, they could race for a third place advance with Ecuador.

Without knowing the actual draw regarding the further stages of the tournament, the most obvious fixture in the final would be Argentina against Brazil, of course, as two of the last three finals saw a game against these two sides, Brazil winning each. Nevertheless, if both of them win their group, they will be on the same path to the final, and a rendezvous between the two in the semis would be necessary. Chile would benefit from that, as in this case Colombia would be the only top side in their way to the final. Any upset in the group stages could easily rewrite this scenario, however, according to recent editions of Copa America, top teams rarely slip so early in the tournament.
Read more about how to bet on the Copa America here.