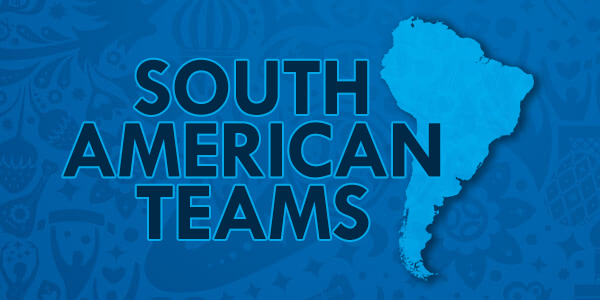 The first matches of the biggest football tournament are only a month away. Knowing that many football enthusiasts want to place early bets on the best South American team of the 2018 World Cup, online sportsbook sites in Brazil have already published the official betting odds.

They seem to be more or less accurate. However, the devil is in the details, so it’s still worth thinking over the factors that determine the chances of the five South American teams that qualified for the 2018 World Cup. Let us take a look at their recent performance and their odds (the multipliers are taken from Unibet Sportsbook).

Securing their place at the World Cup in the intercontinental play-offs, Peru was not expected to make it even this far. In Group C, they will have to face France, Denmark and Australia and the chances of their advancing to the next stage are not high. They don’t seem to be a solid choice for betting on the best South American team in the 2018 World Cup.

Starting the World Cup in group H against a strong Poland, a less convincing Japan and maybe even less threatening Senegal, Colombia has good chances of finishing as the second best of their group. What happens after that is another question.

Four years ago, they got to the quarter-finals. However, James Rodríguez, a key player who scored consistently in the previous World Cup, haven’t been able to perform at the same level since then. Then again, Colombia had to play without an injured Radamel Falcao in 2014, and his presence will certainly be a threat to goalkeepers this summer.

With the now 38-year-old Forlán officially retired from international football, the time has come for new, hungry players to impress the spectators. Coach Tabárez has been focusing on integrating young players. The injection of fresh talent has been doing wonders for the team (the 19-year-old midfielder Valverde is especially efficient). That being said, Uruguay’s main stars are still seasoned players Cavani and Suárez. However, the latter, unfortunately, is a somewhat unpredictable athlete.

Suárez is a talented striker but his physical approach and quick temper always comes with some risk of getting a red card. Even the best online sportsbooks in Brazil have a hard time evaluating the severity of that risk, but it is certainly not to be underestimated. Sports psychologist Dr. Thomas Fawcett argues that should Suárez get in a really heated situation, he “would react in the same way” he had reacted three times in the past: by simply biting his opponent.

Argentina’s team is not the one-man act that a good number of viewers think it is. But even if it were, the results would still be on their side: Argentina was the best South American team four years ago, advancing all the way to the finals. Moreover, this year’s World Cup will most probably be Messi’s last one and he is expected to go out with a bang.

Still, there are some concerns. They might have defeated Brazil not long ago, but it was a friendly, Neymar stayed away and Argentina didn’t seem particularly strong apart from their sole goal. Spain’s recent dominant triumph over Argentina (6-1) also make Messi’s team look less threatening than their betting odds would indicate.

The Brazilian side was the only one to go through the quite messy Conmebol (the World Cup qualifiers for South American teams) with relative ease. This fact alone has already inspired a good number bets on the Best South American team of the 2018 World Cup.

It certainly helps that Neymar will be in the position to arrive to the tournament well-rested but that in itself would not be enough. Fortunately, the embarrassing failure against Germany at the previous World Cup seems to have shaken Brazil up. Tite, their new coach, fortified the back to build a new, improved defense. The team also won more matches in the second half of the Conmebol; they are gaining more and more momentum.

The first match of the World Cup will be played on June 14; the final will be played a month later, on July 15. During that month, we will hopefully see not only dozens of spectacular goals in the South American style but also dominant victories by the team you are betting on and rooting for.