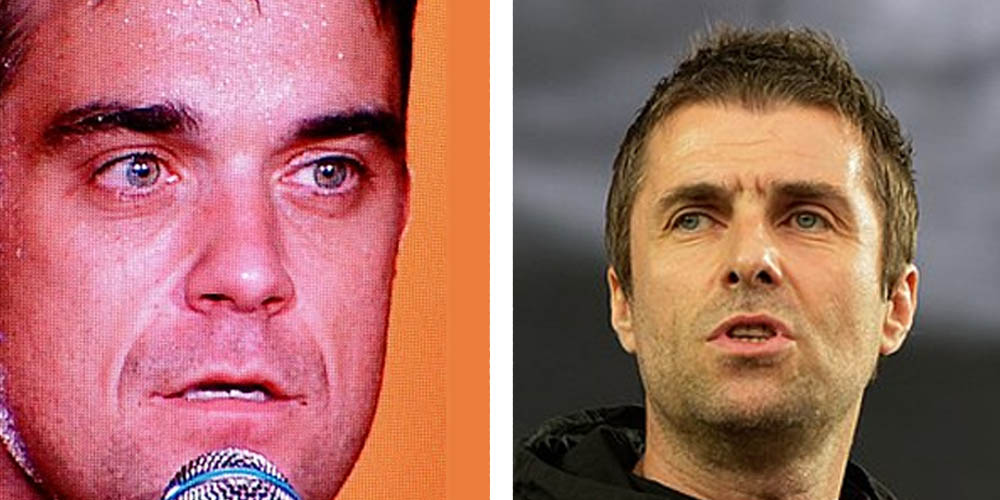 Robbie Williams reignites his feud with Liam Gallagher almost 20 years later after calling ex-Oasis frontman out to fight. In the age of celebrity rivalries, their encounter seems more prospective. The bookmakers have even launched a bet on Robbie Williams vs Liam Gallagher’s potential boxing matchup.

These days Gallagher brothers are involved in trash talks more than music. They might maintain one of the longest public celebrity conflicts and not only against each other. It seems their old frenemy Robbie Williams is also not over his decades-long feud with them. The 45-year old issued the second challenge to Liam to take their rivalry to the boxing ring. Propelled by the dare, several online sportsbook sites in the UK came up with betting predictions.

Few people know that Robbie Williams and Liam Gallagher once were friends. In 1995, when the Take That singer walked out on his band, he easily bounded into Liam’s Rock’n’Roll lifestyle. They played charity football together, spent a lost weekend causing trouble at Glastonbury, and even shared the same stage.

However, the bromance ended bitterly when Noel interfered. The elder brother fat-shamed Williams and completely downgraded his role in the band. The Feel hitmaker didn’t remain silent for long. He might have recently made headlines in online sportsbook news in the UK for calling out Liam but he shot his first dare in 2000.

Choosing a very public sphere to air his grievances, Williams took to the stage to propose a challenge. Liam hit back with some weasel words aimed at Robbie right from a Q Award stage. Throughout decades, they exchanged profanities but the fight never happened.

Should you bet on Robbie Williams vs Liam Gallagher boxing match?

Despite complimenting Liam’s music, Robbie acknowledged there is still bad blood between him and the Gallagher brothers. In his interview with the GQ magazine, the singer admitted that he is keen on settling the conflict in the old way. Williams revealed that Liam wanted to see it through in an abandoned railway track but he aims for a professional showdown. While this might be a publicity stunt, 1XBET Sportsbook tipsters indeed launched a market on the event.

Williams entertains the idea after watching Logan Paul’s fight against KSI. The bloggers made a multimillion PPV success and are headed for a rematch later. Robbie, however, thinks that his bout with Liam will trounce that achievement. As expected, the singer predicted his victory with a knockout outcome. He has athletic privileges and regularly practices boxing. In other words, Williams is far from being ‘the fat dancer from Take That’.

Nevertheless, the bookmakers seem skeptical over the bout coming into fruition hence a 7.50 odds rate on the event at 1xBet Sportsbook. The Mancunian hasn’t even responded to the challenge. He looks keener to bury the hatchet with his brother and works on maintaining a relationship with his estranged daughter. Check out the latest review about 1XBET Sportsbook, before placing a bet on Robbie Williams vs Liam Gallagher’s potential matchup.