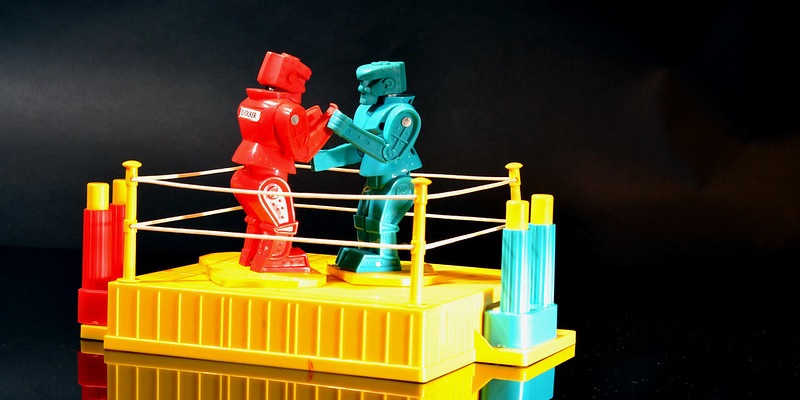 Are you fed up with the boring wagers with low odds on football and pointless eSport tournaments? Leave the past behind and enter the future of gambling. It’s time to start to bet on robot fight. Robot combat’s second heyday is coming.

Despite in the past years, we didn’t meet robot combat on the TV every day it’s still a popular thing. There are only a couple of online gambling sites in Japan like 22bet who features special topics like this. However, if the forecasts are correct it will count as a technical sport soon. And since then, you will bet on robot fight just like you bet on football.

Without question, the heyday of robot combat was in the ’90s. It became one of the most popular TV show genres of its time. The first official event was organized in 1987. It’s called Critter Crunch. (It’s still held annually at the MileHiCon Sci-fi convention.

After the great success, newer and newer tournaments appeared for the nerds who wanted to compete with their gore-mode vacuum cleaners. Finally, in 1997, a British TV production company bought the license of „Robot War” and started to organize professional happenings. Also, they started the Robot War TV series. They made 151 episodes over 12 seasons, from 1997 to 2003.

America’s answer was BattleBots. First, it was a pay-per-view show. Later on, in 2000, it became a weekly program on Comedy Central. Unfortunately, they stopped the creations in 2002. After that, there were years of silence.

But, in 2004 RobOlympics gave a new opportunity to this outstanding genre. The annual Robotic convention renamed RoboGames in 2008. For a long time, that was the only option to watch and bet on robot fight.

Robot Fight will live its renascence in 2020

After many years, robot combat came back to the common knowledge with the return of Robot War and BattleBot to the television. But the ABC and the BBC didn’t keep it for too long. After one season both channels took off the show from their airtime.

In 2018 the epic battles returned under the ownership of the Discovery Channel and the Science Channel. Also, plenty of new Chinese broadcasts appeared.

We expect a new season and even more, the appearance of new shows. Also, we must keep in mind that the limits of this technical sport are technology itself. That means, year by year there will be more and more dangerous machines and more and more hilarious battles.

There are plenty of TV-shows that feature robot fight

There are a lot of options to watch this kind of barbaric amusement. Although, there are only a few TV shows that are directly about robot combat. So, the fans and most of the industry of weird wagers like online sportsbooks in Japan started to focus on online broadcasts. However, even if the bet was available at the 22bet sportsbook, YouTube blocked all these kinds of videos. It was a complete disaster for everyone who is interested in this topic. But why the biggest video streaming page made that restriction? The answer is hilarious. YouTube’s algorithm defined and banned these robot fight videos because of animal cruelty. It is still a question that are YouTube’s developers live in the future and protest for robot rights or are they just lame?

If you bet on robot fight you can expect high odds

Honestly, my favourite thing about robot combat is that the outcome of the matches is completely unpredictable. Sometimes, you know that one machine has more chances over the other but still, they break down so easily. Therefore, if you bet on robot fight you will see high odds all the time even if the statistics picture an already decided match. (This is also true if you bet on mobile games or you bet on old games)

You can find Robot Fight bets under the TV-show section

Until we won’t accept robot combat as an official technical sport, we can’t really bet on it as one. Therefore, if you are looking for these wagers at 22bet, you must browse the Special Bets and mostly TV-Shows. Even if it seems infantile for a lot of people, betting on robotic sports is the future. This topic turns on the fantasy of everyone. And we all know, scientific developments are based on fantasies. In sum, robotics are taking over the personal element in every territory in life. Today you just learn how to use a gambling bot, tomorrow you will gamble on the bot itself.

If we hear about robot battles, our first impression is that steel cubes hitting each other with huge hammers or humanoid Transformers bombing each other with nuclear rockets. The reality lays halfway of these two stereotypes. Basically, there are two basic types of robot fights. Regular and Walking. Regular stands for the amorphous steel cubes on wheels with a broad variety of weaponry. While the Walking is more like a fight scene from a sci-fi movie. These robots must walk (obviously). The audience loves the second option much more but for the developers, the regular option is more rewarding.

The rules are mostly restrictions but if you would like to be aware of everything check the official site of RoboGames.

I won’t tell you the complete list of restrictions, you don’t need to know it if you would like to bet on robot fights. However, there are a couple of seriously dangerous techniques that are strictly forbidden because they not just unfair but puts the audience in danger as well. For example, in the early 2000s, a badly developed explosive destroyed the whole robot arena. Even more, if the fireman wouldn’t come, the whole building would be burnt down.

The future of entertainment lays in the triangle of creativity, technology, and brutality

Sites like 22bet know what is real amusement. That’s why they offer plenty of opportunities to bet on robot fight. Even if, it’s a retro show based on sci-fi fantasies it describes human behaviour. We don’t give a shit about anything meaningful but if we see strange machines that killing each other, we are completely satisfied. Enjoy the devastation, the smoke and the anger of robots. This is our future anyways.