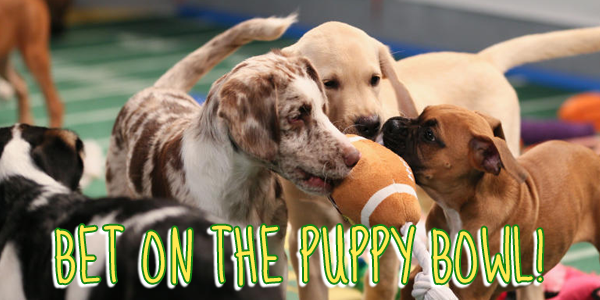 Since 2005, the popularity of Super Bowl has been threatened by another event, that is much more likeable: the Puppy Bowl. The event is becoming bigger and better by each year and the demand to bet on the teams – Team Ruff or Team Fluff – is growing . If you’d like to bet on the Puppy Bowl 2018, this is your lucky day, as 1xBet Sportsbook has already released the odds!

There are only a few months left until the 14th Puppy Bowl, which will provide enough cuteness to last you for another year. What is the Puppy Bowl? Animal Planet’s answer to the world’s biggest televised event, that reaches over a 110 million viewers per year, the Super Bowl. The show, airing on Super Bowl Sundays, is already in the works as it takes more than a hundred hours of footage to produce one Puppy Bowl.

Safety first, especially when it comes to puppies. The athletes, between 12 and 21 weeks old, are overseen by veterinarians, representatives from the American Society for the Prevention of Cruelty to Animals, and the shelters that lend the animals to the show. Every 30-minutes the puppies are given off-camera time to rest and Timeouts are provided for waterbowl refills.

Before placing a bet on the Puppy Bowl 2018, you should definitely learn a bit about the rules:

A touchdown is when a puppy-athlete manages to take the toy to the end-zone. Each year one of the contestants is declared the Most Valuable Puppy (MVP) based on its performance throughout the game. In 2015, teams were introduced to the Puppy Bowl: Team Ruff and Fluff. This enables sportsbooks to provide odds for betting on the Puppy Bowl.

If you’d like to bet on the Puppy Bowl 2018, head over to 1xBet Sportsbook. The odds for Team Ruff and Fluff are even (87/100) at this point, since the contestants won’t be announced before the show airs.