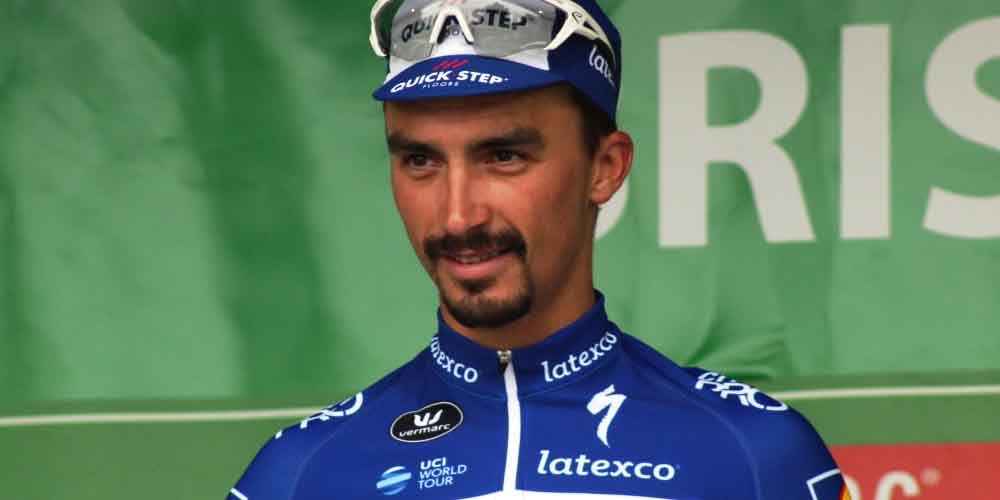 The 2020 Tour de France odds on Julian Alaphilippe are slowly ebbing shorter. The bookies are acknowledging that this could well be his year. He’s already only 5/1 to take home the King of the Mountains title. To win the Tour itself, however, must be his goal. He would be the first Frenchman to win the Tour since the 80s. So should you back him at online sportsbook sites in France, like Bet365, to win “Le Tour”? Well possibly. There’s still an awfully long way to go.

The Tour has a problem. It needs to be seen to appreciate the situation. That means they’ve gone to extraordinary lengths to protect riders, teams, and the rest of the cavalcade. There are almost draconian regulations in place to ensure the Tour can keep going. This prevents it from becoming the modern equivalent of Ingmar Bergman’s strolling players in The Seventh Seal. Unfortunately, as the bookies cut the 2020 Tour de France odds on Julian Alaphilippe winning, out come the fans.

Seeing happy fans at the roadside is gut-wrenching. In such times as ours, it seems so cavalier, so risky. Yet to see them urging their favorite riders onwards one instantly realizes just how integral they are to sports. The empty stadiums at football matches or the cricket lacking all that crowds bring with them. Unfortunately, the French gambling laws of common sense might protect them from any adverse knock-on effect also seems a little risky. This Tour is still on probation really.

Tour Bubble May Yet Burst So Bewaree

However, you can’t argue with the 2020 Tour de France odds on Julian Alaphilippe. If you like to bet on cycling in France, it’s been a long time since you’ve had a countryman to back. This year however he’s in with a serious shout. Sure, the usual suspects still get the shortest odds on the Tour de France, but he’s in contention. His 10/1 is not far behind the 6/1 on Dumoulin, the 13/5 on Egan Bernal or 13/8 on Primoz Roglic. He is, naturally, rather pleased with the situation.

“I’m proud to wear it. It’s huge happiness that I feel. So I will give it my all to keep it.” He said of retaining the yellow jersey after stage 3. “If I keep it, it will be another bonus. Every day is just a bonus.” Which is the sort of understatement that makes you want to rush out and take up the 2020 Tour de France odds on Julian Alaphilippe. If he’s playing it down to that extent he must think he’s in with a shot at the big win. But does that make him a good bet on sports in France?

Get 2020 Tour De France Odds On Julian Alaphilippe At Bet365

It would be nice to grab at the 2020 Tour de France odds on Julian Alaphilippe and join in with the narrative. It’s a great story in an otherwise bleak year. However, there does seem to be every chance the Tour won’t get to Paris. So you can bet on Roglic, take the odds on Dumoulin or bet on Egan Bernal to win back to back Tour de France titles. Just don’t lose sight of the big picture. They’re doing their best, but their best might not be good enough. Especially if Julian retains the lead.

King Of The Mountains Odds

Fortunately, perhaps, at least in terms of public health, whilst he might have the King of the Mountains jersey in his pocket, the overall classification will require far more. Perhaps more than he has to give. He’s under a lot of pressure. That’s why the 2020 Tour de France odds on Julian Alaphilippe won’t close up further till after the alps. They could take a toll. Still, if he’s still in yellow after that, he’ll be well worth backing at online betting sites in France like Bet365.

The 2020 Tour de France odds on Alaphilippe give French cycling fans hope but will their ardor bring an end to the cavalcade’s progress?