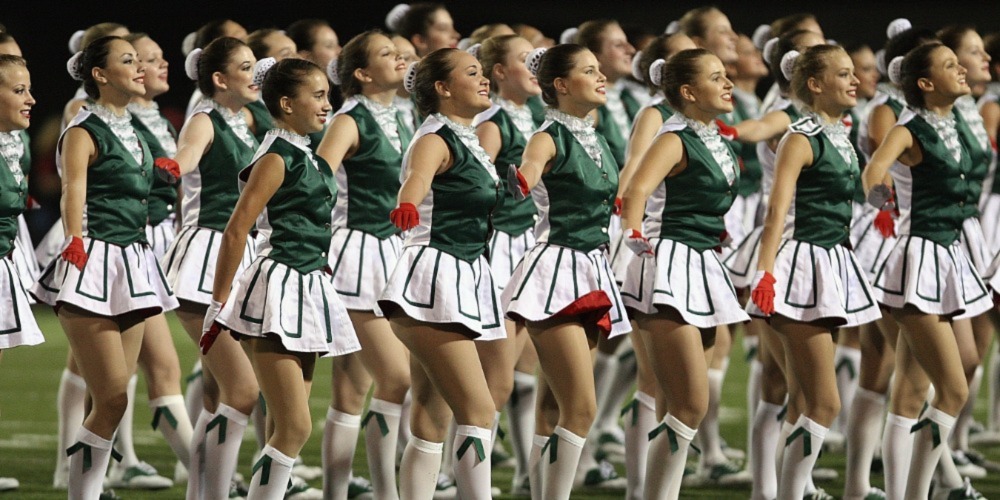 Let’s start with their similarities! We have already mentioned most of the similar features. The athletes perform a dance routine full of jumps, lifts, and acrobatic elements in both of them. They require endurance and flexibility. Neither is an Olympic sport yet, but they work toward that goal. Cheerleading has several divisions and international associations, which the International Olympic Committee acknowledged as a sport that has a chance to become part of the Olympic Games.

A big cheerleading team’s choreography contains stunts, baskets, pyramids, and tumbling. While they perform these elements to the music, an essential part of the choreography of the teams competing in the ICU system is a cheering unit without music. This is a minimum 30-second long part which they usually present first. A team performs the same routine, even if there is a semi-final and a final. As for betting, Unibet Sportsbook follows cheerleader championships and offers special bets too.

In dynamic exercises, the emphasis is on jumps, summersaults, and various throws. A significant difference between cheerleading and acrobatic gymnastics is that the gymnast is allowed to land on the ground after a high jump, whereas it’s prohibited in cheerleading. Combined routines include both dynamic and balance elements. Individual acrobatics have a big role here. At the end of the competition, the judges add the three scores and announce the winner.

Cheerleaders are confident that their sport will be part of the Los Angeles Olympics in 2028. The International Olympic Committee recognized cheerleading as an Olympic sport last year, so their chances are pretty good. Online sportsbook sites in the US follow the news and provide information about cheerleading. An interesting fact is that men introduced cheerleading originally in the United States. In the 1880s, the atmosphere of football games at Princeton University inspired students to form an all-male club dedicated to cheering.

Later, many similar clubs were established in universities overseas, but, when the majority of men had to join the military during the Second World War, women began to take over cheerleading. In the second half of the 20th century, cheerleading grew into an independent sport, and since the 2000s, athletes can participate in World and European championships. Which one has a better chance to become an Olympic sport? Cheerleading vs. acrobatic gymnastics?

Acrobatic gymnastics is part of the World Games and the European Games but not the Olympics. Plenty of countries hold regional and national competitions, and it’s pretty popular among bettors at Unibet Sportsbook.

Cheerleading vs. Acrobatic Gymnastics – The Athletes

In cheerleading, we distinguish two categories based on the number of athletes. There are small divisions called partner stunts with two people and group stunts with three to five athletes. The former is for mixed pairs, but the latter consists of all-girl or mixed-gender groups. Then there are the bigger groups with 12-24 athletes or more. Usually, these are mixed-gender teams.

There are no large team competitions in the acrobatic gymnastic tournaments. The biggest category is in the men’s group, where four male competitors can compete, while women’s teams can have three athletes.

In cheerleading, the ICU recommends that female athletes wear a top that covers their stomachs, but this is not a rule yet. However, they are not allowed to wear provocative uniforms. The sleeves of the female cheerleader’ tops are traditionally long, but they wear shorts or skirt-covered shorts. The cut line and length of the skirt are optional, and the organizers don’t specify the materials, but the outfit has to look proper. As for the men, their uniforms have no strict regulations, but the shoes must be durable, cushioned, and support the ankle and heels.

On the other hand, in acrobatic gymnastics, the rules define the athletes’ clothing in great detail, so much so that photos and diagrams are even included in the rulebook. Female athletes can wear leotards with or without a skirt or a jumpsuit.

The judges pay attention to every detail because their appearance has to be elegant. The men have to wear form-fitting clothes like sports jumpsuits so the judges can see every move. They can compete barefoot or in gymnastic slippers. Now that you know the basics check out the cheerleading and acrobatic gymnastics events and odds at Unibet Sportsbook!