Is there an inherent tribal right to operate online gambling? 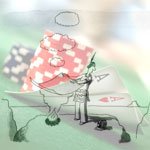 Just when it seems we have heard all possible arguments for and against American internet casinos, someone chimes in with a novel opinion.

In the case of California’s proposed iGaming bill, that person was Chief William Bills of the Winnemucca Indian Colony in Nevada, who criticized Sen. Rod Wright’s plans to impose licensing requirements on possible tribal online casinos.

To support his cause Chief Bills referred to the tribes’ ‘inherent rights’ to online gambling, because “the Indians of North America have used the airways for communications from tribe to tribe and have games of chance ingrained in their historical lives for thousands of years and certainly before European occupation of North America.”

Although the attempt to establish a connection between smoke signals and iGaming may seem somewhat tenuous, the overall argument about tribal autonomy merits attention nevertheless.

While American gambling laws leave much of the regulation up to the individual states, Native American rights to self-regulation in this industry have also been recognized by the courts since 1987. Applying the same principle of sovereignty to the virtual realm does appear to be a logical conclusion.

It is also somewhat ironic that while Sen. Rod Wright is a strong proponent of states’ rights, his bill would curb tribal rights within the Golden State, at least according to Chief Bills.

In fact, he also criticized Californian tribes for warming up to Sen. Wright’s ideas.

“By supporting the Roderick Wright bill in California as written, they will be surrendering their tribal rights to self government. This will be a very slippery slope and one that will have the tribes losing in online gambling while the major casino consortiums will control the majority of this business in America,” claimed the Native American leader.

He went on to add in no uncertain terms that “the tribes really should not have to be required by the state of California [to acquire] a gaming license because they have the right to self government and self determination and can essentially license themselves if they choose to do so.”

As it has been alluded to, there is of course a business side to it all. Chief Bills is convinced that a USD 35 million intra-state poker licensing fee would essentially preclude Californian tribes from operating online poker sites in the US, leaving only the richest brick-and-mortar casinos eligible to do so.

“It is obvious that Senator Wright has not been shown or understood the mathematics or business plan of an online poker room. There is just not that money available in the gross revenues of a poker room,” added the Chief.