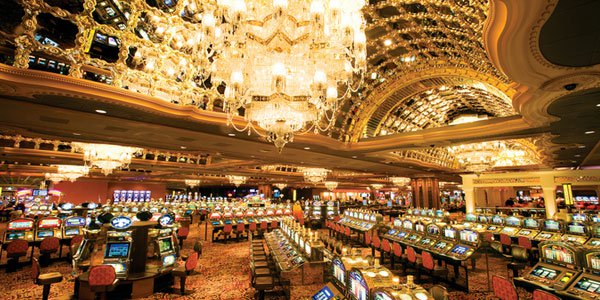 The man who once ran for president on an anti-public assistance platform is now calling up government officials begging for exactly that.

Atlantic City is on the downslope, and Donald Trump’s TajMahal recently became the city’s fourth casino to file for bankruptcy in 2014. While the others—the Atlantic Club, Showboat and Revel—have shuttered their doors for good, there is still hope that the TajMahal can stay open.

The Taj has been a popular spot for tourists and has hosted some of the most high-profile conventions and poker tours in the USA. The last five years have brought falling profits, however, due to new competition from casinos in nearby Pennsylvania.

Trump’s knight in shining armor came in the form of investor Carl Icahn, who announced on Wednesday that he would extend Donald Trump an emergency $5 million line of credit.

While the sum won’t come close to getting the casino back above water, it—combined with several other bankruptcy measures—could allow it to meet its expenses and debt obligations until January 16th, which has been dubbed “doomsday.”

If the TajMahal isn’t shown to be solvent by that day, the casino will pass from Trump’s ownership to that of his creditors. The biggest of which is none other than Carl Icahn.

Icahn gets paid win or lose

The local gambling news
press reported that Trump ows Icahn roughly $292.5 million, including $6 million in unpaid interest on that debt. Thus the recent credit line is merely a drop in the bucket.

Icahn’s position as Trump’s primary creditor gives him a lien on almost all of the property owned by Trump Entertainment. He is thus in a win-win position: if the TajMahal recovers from the bankruptcy and restores profitability, Icahn will be able to swap his debt for an ownership stake in the reorganized casino. If the casino is deemed insolvent by doomsday, the property will pass into his ownership.

Given that Icahn has repeatedly extended credit to Trump for the purpose of keeping the casino running, it appears that he would prefer to be paid in cash rather than kind. The casino property is unlikely to fetch close to $292.5 million on the open market, so Icahn has an interest in helping Trump as much as possible.

In a delicious if expected twist of irony, the same man who denounced the food stamp program by declaring that “taxpayers are being shaken down by this outrageously mismanaged government program,” is asking for financial aid from the government.

Trump Entertainment has requested $175 million in aid from the state of New Jersey to be dispersed over a span of five years, including $55 to help it weather the bankruptcy proceedings. The state government has not yet made a decision, although lawmakers including Atlantic City mayor Don Guardian haven’t exactly expressed glee at the prospect.

While Trump’s still-under-review request would come in the form of special tax breaks rather than cash transfers, they amount to a government handout nonetheless.

In September Trump floated the idea of cutting health benefits to the casino’s 3,000 employees as a way of getting costs down to a manageable level. His thinking was that in a city offering few employment opportunities, workers would rather take a reduction in benefits than lose their jobs altogether.

President of the Local 54 Bob McDevitt thought otherwise. Calling Trump’s bluff, the union rep has issued a legal appeal to the healthcare measure, and has refused to drop it under circumstances discussed heretofore. McDevitt’s refusal to budge prompted Icahn to pen an open letter:

Bob – As you know, this is a bad investment for me at this time, evidenced by the fact that no one else is willing to invest even a dime. I thought the company’s proposal and my agreement to support it would give the union what you wanted so that we could move forward. All that is being asked of you is to withdraw your appeal. I’m amazed that the union is unwilling to agree to a company proposal that restores two years of healthcare, provides a new pension, keeps the Taj open and saves 3,000 jobs … if you just withdraw the appeal and give us labor peace.

McDevitt responded by accusing Icahn of exploiting the decline of Atlantic City’s casino industry for personal gain, and of contributing to the TajMahal’s insolvency by “lending at 12% interest rates.”

The future of the TajMahal

Things don’t look rosy for the casino or its 3,000 cooks, bartenders, croupiers and hotel staffmembers, but there is still a chance it will stay open. But if it indeed survives past January 16th of next year, it will be in a slimmed-down form.

In order to compete in today’s austere Atlantic City, any casino needs to operate at low cost. Now that American gambling laws allow online casinos to operate in Atlantic City, some casinos are investing in lower cost virtual gaming. Regardless of how events unfold, Donald Trump and Carl Icahn will still be rich, and a lot of hard-working people will be unemployed.