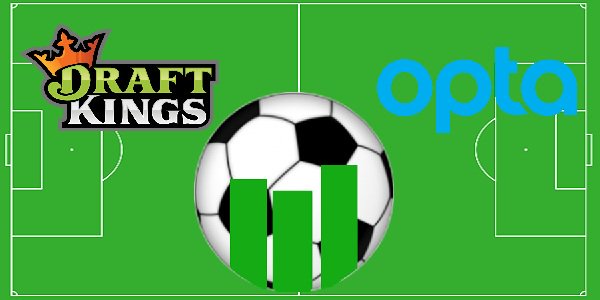 According to the deal between DraftKings and Opta, the sports data provider will supply the daily fantasy sports operator with live soccer statistics.

The DFS site already offered association football for their players, but with the deal involving DraftKings and Opta, this will be continued on a different level. Meanwhile it seems that US gambling laws will leave the DFS sites to operate as they do – for now…

The daily fantasy site will get live soccer performance statistics from the data provider according to the deal between DraftKings and Opta. This will include the English Premier League, the Major League Soccer and the most important club competition in soccer, the UEFA Champions League.

This will naturally bring a larger player pool. Users will be enabled to select 11 players to their teams – until now they named sides with eight players. A goalkeeper, three defenders, three midfielders and two forwards will be mandatory, plus users can name to additional players to boost their daily fantasy teams. Statistics will be also enhanced with tackles and interceptions included.

Players will feel so much closer to the real thing

The daily fantasy operator’s vice-president, Mark Nerenberg revealed of the deal involving DraftKings and Opta that this is one of many moves in order to enhance player experience. He said, “DraftKings partnership with Opta marks one of many steps we are taking to adapt our product as we work to serve and excite new audiences around the world.”

He added, “Opta’s renowned sports data and analysis capabilities will enhance our games, making them more dynamic for our fans and further establish our offerings as the true leader in DFS.”

Opta’s parent company, North America at Perform Group’s vice-president Angus McNab also commented the DraftKings and Opta deal, “The daily fantasy space has shown some real innovation in recent times and we are delighted to be working with DraftKings, one of the leaders in this field.”

US Congress to leave DFS sites to be for now

Opta VP Angus McNab is delighted to work with DraftKings

According to Washington insiders, it seems that legislation won’t go after DFS sites anytime soon. Though federals initiated an investigation, after interesting betting stories emerged in connection to DFS operators, and based upon comparing DFS to internet gambling, online poker and internet betting in the US, it looks like the lobbyist firms DraftKings and FanDuel hired recently, are doing a good job.

Judiciary Committee member Sen. Chuck Grassley told the media that they aren’t planning to investigate the daily fantasy business in the near future. He said, “Right now, I don’t have an opinion. None of my colleagues have asked me to have hearings. It’s relatively new. I know it’s seven or eight years old, but it’s relatively new in terms of people talking about it politically.”

Several congressmen expressed recently, both Democratic and Republican senators, that though they want to look into the industry, the issue is far from being a priority. Six Federal States have banned DFS sites so far – Nevada most recently, tying their operation to obtaining an online gaming license – and though a similar move is expected from New Jersey, the vast majority of states won’t ban them in the near future according to experts of internet gambling in the US.

If you are from a state that legalizes online gambling, you might be better off with a legal online betting site in the US, so feel free to consult our directory of online sportsbooks accepting US players to find a convenient internet sportsbook in the US.