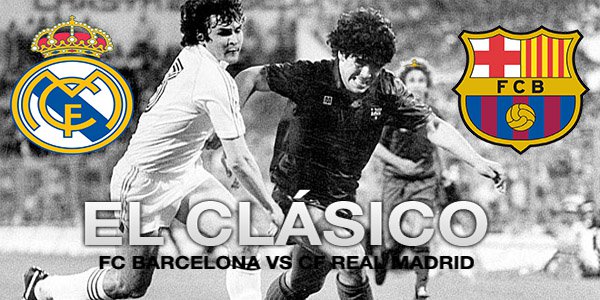 The clash between Real Madrid CF and FC Barcelona is so much more than just a great football derby, it is one of the most important events in Spain.

The football game between Real Madrid CF and FC Barcelona is often referred to as “El Clasico” due to the historical rivalry between the two clubs. This is one of the greatest sport events of the world with over 400 million viewers, according to reports of Spanish gambling news. Only the Champions League final is watched by more viewers, which proves that these two teams are among the most popular football clubs in the world.

But the rivalry is not completely sport related, it goes back much further in time and it has whole other implications as well. The Spanish and the Catalan sides had incidents in the past in connection with player transfers, while politics also takes part in the relationship between Spain’s two most successful football teams.

Political issues between Spain and Catalonia

Spanish general and dictator Francisco Franco was a Spanish nationalist who went against Catalan interests because he wanted a united Spain. Franco banned the use of Catalan language and the only place where people of Barcelona were allowed to use their own language was at Camp Nou. This quickly turned the stadium into a sacred place where people went to express their freedom, and thus the Blaugrana motto was created: “mes que un club” (more than a club).

It was believed at the time that Franco and his party were supporting Real Madrid. In 1943, at the semi-final of Copa del Generalisimo, Barcelona have suffered the greatest defeat of their history against the Royal Club. Los Blancos won by 11-1 against their rival, but as some rumours say it happened because Franco and his men threatened Barcelona players. However, it has never been proven and FIFA and UEFA regard it as a legitimate result.

In recent times, political issues are getting less significance when it comes to El Clasico, however there are still signs from the past effecting the present. There were some smaller demonstrations in recent times in Barcelona for becoming independent of the Spanish state. If that happens, the Blaugrana would not be allowed to play in La Liga which would make a huge loss of income for Spanish football.

It would not be fair to blame all the rivalry between two football teams on politics. They also had their difficulties when it comes to signing players. The first one of these is Real Madrid legend Alfredo Di Stefano. Both clubs stated that they have the Argentine’s registration, which was confusing at the time. FIFA came up with a solution that he plays one year for the capital side and the next one for the Catalans, but Barcelona disagreed so he became full time player of the Whites and made history there.

It happened on the other way around as well – Luis Enrique, the current coach of Barca, has played for Real Madrid for 5 years. After his contract with Los Blancos expired, he decided not to renew it but sign for the greatest rival of his former club, FC Barcelona, on a free transfer. Online gambling sites in Spain reported that even the Catalan fans were unsure about their new player, but he soon became team captain and a beloved person by the public.

However, the most infamous switch between the two sides was the signature of Ballon d’Or winner Luis Figo. There was a buy-out clause in his contract which allowed Real Madrid President Florentino Perez to sign the top class attacking midfielder. The Portuguese winger has played for Barcelona for 5 years and became the captain of the team. The former Catalan captain has won the Golden Ball due to his world class performance in Barcelona, even though he was already wearing the white shirt by the time he received his prize.

Infamous games that contributed towards straining the clubs’ relationship

The two Spanish giant have had many interesting games in the past. One of the most memorable one is from 21 October, 2000 at Camp Nou. This was the first game for newly signed Luis Figo against his former employer. People who used to love the Portuguese kept referring to him as a traitorous persona, most namely “Judas”. Every touch of his was whistled and people threw everything in the field when he was about to take a corner. Then the most unexpected and shocking thing happened: A head of a pig was thrown on the grass in front of the new player of Real Madrid.

Among many others, the most interesting result was Jose Mourinho’s first El Clasico as manager of Los Blancos. Galacticos were still undefeated in the league after 12 games, winning 10 of those. However, Barcelona have defeated their ancient rival by a humiliating 5-0 result. The Royal team did not manage to take the loss with pride. At the end of the game, Sergio Ramos has gone mad, tackling Lionel Messi brutally and slapping his national teammates Xavi and Puyol after being sent off by the referee.

Barcelona will next face Real Madrid at home on 22 March. The Royal Club have shown far superior performance during the first game in the season, but are regarded as underdogs for the next clash with most La Liga betting sites. Online sportsbooks in Spain believe that Barcelona are favourites having set the odds at 1.75 (3/4) for the triumph of the Catalan side, while that of Galacticos are at 4.00 (3/1) by Bet365.