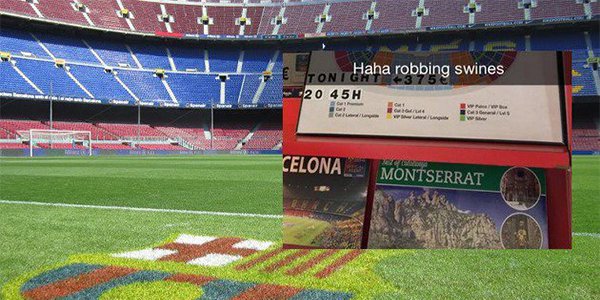 Many English football fans are in Barcelona on Wednesday to watch their team against the Catalan side.

FC Barcelona host Manchester City in the Round of 16 of the Champions League on Wednesday for which many English football fanatics travelled to the Spanish city. They will support their team as they fight to qualify to the next round, however they have strongly objected against the prices for the tickets, according to Spanish gambling laws.

There were 4 categories of tickets on sale and the cheapest one of them cost EUR 195 for those Manchester City fans who decided to travel to Spain from England so that they can support their team at Camp Nou. The most expensive ticket cost EUR 375 while there were tickets for EUR 210 and EUR 240 as well.

A great match comes at a great price

The prices are so high because the game is expected to be a thrilling clash between the current Spanish league leader and the reigning English champions that is second in the Premier League this year. Barcelona are favourites for the match but the Manchester-based side are ready to surprise the football world.

The Catalan team won the first leg 1-2 at Manchester’s Etihad Stadium as Suarez scored two goals and Aguero managed to respond with only one. Online gambling sites in EU believe that Manchester City are huge underdogs for the clash as their odds for eliminating Barcelona are 11.00 (10/1) by Bet365.