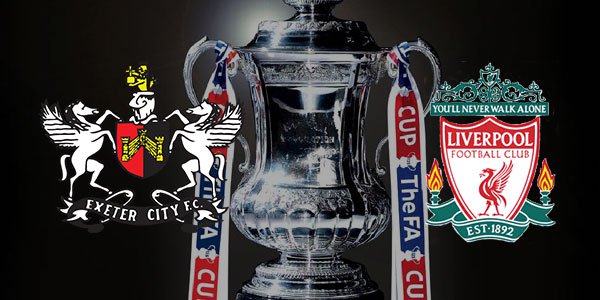 The third round of the FA Cup kicks off on Friday night, so have a look at the Exeter v Liverpool odds!

The most interesting stage of the oldest running football tournament of the world has arrived! The FA Cup 3rd round is the big opportunity for the lesser sides made it this far to prove themselves against the biggest professional football clubs in the country. League Two outfit Exeter City will have the opportunity to entertain Liverpool on Friday night. So let’s check out the most interesting Exeter v Liverpool odds with the courtesy of Bet365 Sportsbook, one of the best internet betting sites in the EU.

Three days after playing in the League Cup semi-final in Stoke-on-Trent, Liverpool have to kick off their FA Cup campaign. The Reds have an extremely tough schedule with league games against Arsenal and Manchester United coming up next week. Taking into account the injury crisis Jürgen Klopp has to deal with currently – 11 first team players are sidelined at the moment – the weakest Liverpool side in years for a competitive game is expected to be named against Exeter.

Klopp has some unavailable players

Klopp doesn’t have a completely fit centre-back at the moment with his last man, Kolo Toure suffering a minor injury against Stoke on Tuesday. He also lost his arguably most important player, Brazilian playmaker Philippe Coutinho with a hamstring injury. Liverpool are trying to sign players and terminating loan deals desperately to put together a half-decent squad in time to face Exeter.

The hosts are currently 16th in League Two, meaning that there are 72 places between them and Liverpool in the English league system. They have lost their last three home games, so they are far from their best shape. However, anyone who bet on sports in the UK might know that these facts often mean nothing in an FA Cup tie. Especially with the underdogs hosting the game.

Liverpool are 1.44 (4/9) favourites according to  Bet365 Sportsbook<, with an Exeter victory priced at 7.50 (13/2). Since Bet365 Sportsbook has the best Exeter v Liverpool odds for a draw with 5.00 (4/1) amongst internet betting sites, you should totally think about picking this outcome considering the circumstances of the tie.

Bet365 Sportsbook also has the best Exeter v Liverpool odds for a goalless draw at 15.00 (14/1). When placing a bet on any other Correct Score, Half-Time/Full-Time or Scorecast markets at Bet365 Sportsbook, don’t forget that you are always protected by the bore draw money back feature, that guarantees a refund for losing bets if the game finishes 0–0.

Christian Benteke, who started on the bench on Tuesday, is expected to lead Liverpool’s forward line at Exeter. The Belgian has even odds to score a goal, and this is the best offer on this market you can find around the internet. This also goes for his compatriot Divock Origi, who might be his double in this game and who is available for 2.25 (5/4) on the anytime goalscorermarkets.  Bet365 Sportsbook also offers the best odds for these two to score two or more goalswith 6.00 (5/1) for Benteke and 7.5 (13/2) for Origi.

Arguably the best offer for this game is on thewinning marginmarkets. If you have confidence in the makeshift Liverpool line-up and Jürgen Klopp’s tactics, you should throw some money on a big win.