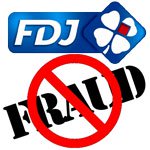 Looking like a reticent CEO of some Swiss private bank, retired engineer Robert Riblet (67) may seem like an unlikely candidate to undertake a quixotic pursuit. Nevertheless, this gentleman has been a regular feature in French gambling news since he announced his intent to bring the national lottery operator to justice.

Even though Francaise des Jeux (FDJ), a former monopoly in most sectors of gambling, lost many of its privileges when French gambling laws were changed in 2010, the company still remains a major player in the market.

FDJ offers various gambling options through its sites, including lottery, sports betting and even a French poker room, but it was the company’s physically sold scratch cards, and more notably the associated odds, that upset this particular retiree.

Having spent EUR 33,000 and having visited some 1,500 retailers in the course of three years, Riblet claims that FDJ’s scratch cards are “manipulated”, thereby defrauding many of the players.

Presenting his case before a court in Nanterre earlier this week, the plaintiff insisted that contrary to company claims, the scratch cards distributed by Francaise des Jeux were not games of chance but were founded on a highly predictable principle. Namely, each batch of cards contains a scattered prize pool of around of EUR 50, as well as a separate prize pool of over EUR 20, generally assigned to a single card within the batch.

Knowing the pattern allows retailers and certain players to increase the frequency and size of their winnings beyond the normal statistical spread. If this is true, it would certainly indicate a grave lack of professionalism on behalf of FDJ and could even be considered a case of gross negligence.

Riblet, however, goes even further. He claims that FDJ knowingly sold a defective product and caused a “breach of equality” among scratch card players when the batches were still being sold even after the big prizes had been claimed.

The perceptive pensioner has been demanding that the company pay one million euros in damages. The court is set to rule on the case on August 23rd.