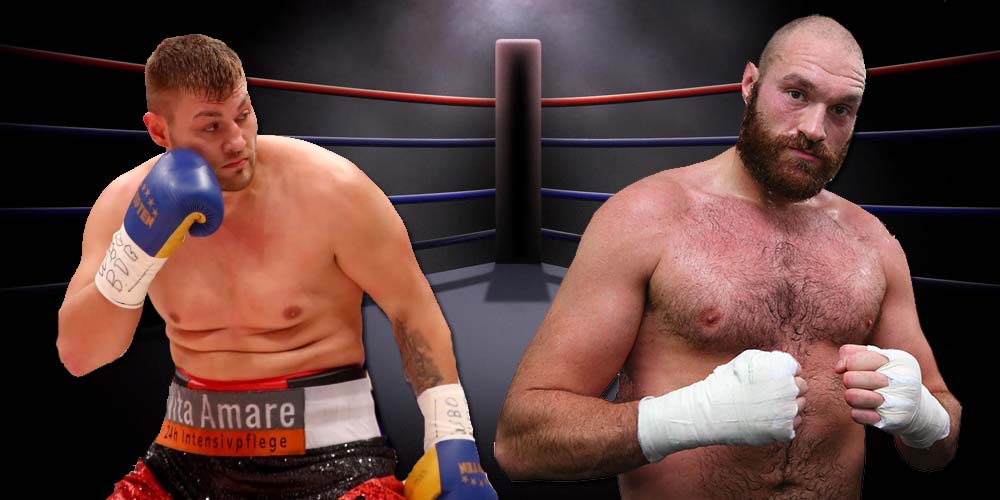 Tyson Fury is returning to the ring on June 15 in Las Vegas. He will fight the German heavyweight Tom Schwarz at the MGM Grand. Fury vs Schwarz betting odds show as if the little-known Schwarz will have no chance to fight back. But, we think the young, unbeaten Schwarz might make one of the biggest upsets of the year.

Many fans are not aware of Tyson Fury’s next opponent Tom Schwarz. In addition, the online sportsbook sites in the US suggest as if no way for Schwarz to last 12 rounds. Apparently that means Fury the “Gypsy King” is a massive favourite, fighting only to gain exposure in America. Fury vs Schwarz betting odds stand at -10000 for Fury to win the fight at BetVictor.

However, the young, undefeated heavyweight Tom Schwarz should not be overlooked. He is hungry and in good shape. Besides, if you bet on Schwarz to win the fight you will win a very good money with +1600. Just check our review about BetVictor, in order not to miss such great odds.

Bookies expect Fury to win by KO before the ninth round

The lineal heavyweight champion opted out of an immediate rematch with Deontay Wilder, following their draw in December. The “Gypsy King” picked a little-known German heavyweight Tom Schwarz to gain exposure in America. He will try to boost his reputation before stepping back into the ring with Wilder. Fury (27-1-0, 19 KOs) at the age of 30, is more experienced and has height advantage over his next opponent.

After two years of inactivity, mental health, and being overweight, Fury was able to come back and outbox Wilder, the biggest puncher in the world. Many even think Fury deserved to win the fight against Wilder. Therefore, Fury vs Schwarz betting odds stand at -200 for Fury to win by KO at BetVictor, and -138 for the fight to end before the ninth round.

The 24-year-old, Tom Schwarz has fought his entire career so far in Germany and the Czech Republic. He is undefeated and has a record of 24-0, with 16 KOs. Although Schwarz never fought someone at the level of Tyson Fury, he is ranked second at the WBO. So will his 25th victory come against Fury at the MGM Grand?

Online sportsbook news in the US reported about Schwarz as an obscure opponent, who has never shown his abilities out of his home country. However, his last victory was on March 2 against Kristijan Krstacic by KO in the second round. He also won against Dereck Chisora’s upcoming opponent Senad Gashi and Dave Allen’s old foe Samir Nebo. In addition he won against the former Dillian Whyte victim Ivica Bacurin.

Maybe Tom Schwarz still needs to fight against British or American heavyweights, to gain recognition at the world level. Maybe this is what he seeks to do in his next fight against Fury. If you think Schwarz is underrated and hungry enough, bet on him to win, by KO (+2500) or by decision (+5000).