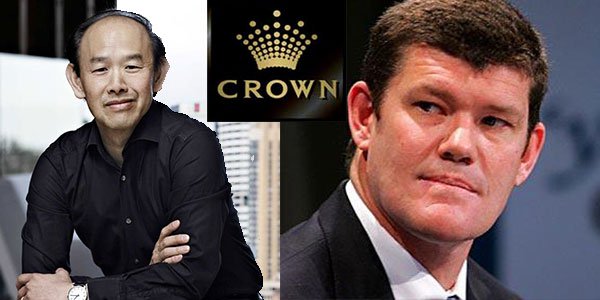 Billion dollar trademark battle between casino giant and property developer to be taken to court last week in February.

Justice John Griffiths is set to hear James Packer’s Crown Resorts complaint against Iwan Sunito’s Crown Group in a Crown trademark dispute which has top casino operator, James Packer and property developer, Iwan Sunito, at loggerheads over who should wear the crown.

• First court hearing to be held 24 February in Sydney
• Crown Group apartment developer accused of using Crown Resorts $10 billion trademark
• Either the $3.5 m Crown Group project or the $2 b Crown Resort project may go under

The battle of the crown and who will be king will have its first court hearing scheduled for February 24 before Justice John Griffiths after the Federal Court received a file from Peter Chalk at Ashurst Australia. “Each of the Respondents’ Marks is substantially identical with, or deceptively similar to, one or more of the Crown trademarks”, Crown Resorts claims.

Packer is optimistic that will be able to undergo its own property development project linked to the proposed $2 billion Crown Sydney hotel and casino development planned for the waterfront Barangaroo development precinct. The casino mogul would like Crown Resorts to build a 275-metre skyscraper with 80 apartments.

The Crown group started in 1996

Indonesian-born Iwan Sunito, CEO of the Crown group, built his own architecture firm in 1994, before labelling the Australian property development company ‘Crown Group’ 17 years ago, when it built its first project in Bondi.

If the crown fits then let them wear it, responsibly at least

A spokesman at Crown Resorts says the company is worried that Sunito is building up his company by “taking advantage of Crown Resorts’ brands and reputation in its offerings of residential apartments, serviced apartments, hotel rooms and retail shopping”.

This has led consumers to believe that luxury apartments of a value of over $3.5 billion belong to the casino company and its hospitality brand. Mr. Sunito’s Crown Group, who co-founded the company with Paul Sathio, has most of his projects in Sydney.

Most of their properties are sold to wealthy Chinese property buyers seeking to make secure property investments. However Crown Resorts will also want to cash in on Chinese market too in order to decrease the net cost of the development and to boost the company’s financial benefits from such an ambitious project. Apart from the apartments project the Crown Resort plans to build 350 rooms in its six-star hotel.

If the crown fits then let them wear it

Mr. Packer refers to the apartment project as a key project and states that “There’s nothing more important for me than Sydney”. Just last week Mr. Packer expressed fears that the casino may not be able to honor the November 2019 launching. This would have coincided with the expiry period of the license, granted under Australian gambling laws, for Echo Entertainment Group, Crown Resorts, rival, to run flagship casino.

A Crown Resorts spokesman said the company was also seeking damages, stating that “Crown Resorts has been left with no choice but to take this action to protect its hard-won reputation… and has become increasingly concerned that Crown International Group is taking advantage of Crown Resorts’ brands and reputation in its offerings of residential apartments, serviced apartments, hotel rooms and retail shopping”.

Crown Resorts, Crown Sydney and the Crown Resorts logo –a black square with a gold illustrated crown are being registered for trademark under Crown Resorts. While Crown Group wants its own black and gold logos and the brands Crown Group, Crown Residences and Sydney By Crown.
Summary
The court case ruling in Sydney will see only one king reigning. For the loser, billions of dollars’ worth of projects is at stake.