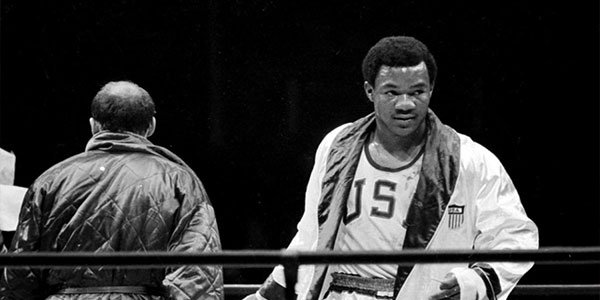 George Foreman has been a major figure in boxing for four decades who was able to successfully come out of retirement after almost 20 years and regain his title. His resilience is as powerful as his history. Foreman was inducted into the World Boxing Hall of Fame and the International Boxing Hall of Fame. Foreman’s length in the ring was legendary in US gambling news.

• George Foreman grew up on the rough streets of Houston’s 5th Ward.
• Foreman joined to Job Corps to learn a vocation and get off the streets.
• Foreman knocked down Joe Frazier 6 times in 2 rounds.

Born in Marshall, Texas, Foreman was raised in the tough area of the Fifth Ward District in Houston. He robbed people and created mayhem until dropping out of school at 15. Joining the Job Corps, Foreman became involved in boxing. Winning through the amateur ranks and gaining a gold medal in the 1968 Olympics, Foreman turned pro and gained a reputation for brutality. The Undefeated Heavyweight champ would face Ali.

The Rumble in the Jungle

Foreman and Ali were to square off in the summer of 1976 in Zaire now known as the Democratic Republic of the Congo. Foreman suffered a cut during training and the bout was postponed. Unfortunately this resulted in Foreman not being able to spar and properly prepare out of risk of re-opening the cut. This had an increasingly negative effect on Foreman. Ali toured the country greeting the people of Zaire.

Foreman became another victim in a psychological battle that Ali classically inflicted on his opponents. In the U.S, Foreman was the favored to win because he brutalized Joe Frazier and Ken Norton, the only two boxers to beat Ali at the time. When Foreman stepped off the plane in Zaire, he heard the crowd chant out “Ali, down with Foreman.” It was instantly apparent that Foreman was not so comfortable outside his element.

The fight started with an aggressive Ali who outscored Foreman in points. From round 2, Ali began to use the ropes while Foreman delivered huge body punches. Foreman was unable to deliver any serious head shots. Foreman later made the claim that Ali’s coach Angelo Dundee had the ropes loosened to allow Ali to lean better on them. The leaning style became known as the “rope-a-dope” and is still sheds much controversy to this day.

Ali would later admit that Foreman put knocked him out twice while he was on his feet. In the 8th round, Foreman, while avoiding a wild punch, became off balance. Taking advantage of this, Ali threw a barrage of punches including a hard right cross that knocked Foreman down. Ali regained the Heavyweight Title and became the only boxer that could ever stop Foreman. He was never able to get a rematch with Ali.

It wasn’t until 1976 that Foreman made comeback by fighting Ron Lyle, who already was beaten by Muhammad Ali. The bout was long and hard and resulted in knockdowns by both opponents until Lyle finally remain down. Joe Frazier would be next for Foreman and the fight proved better than their last confrontation but still resulted in Frazier’s demise. Foreman won two more fights to end 1976 on top.

Foreman’s next bout with Jimmy Young in Puerto Rico proved monumental because it ended in Foreman becoming ill from heatstroke and suffering a near-death experience. Crediting God for his survival, Foreman stopped boxing and became an ordained minister. It wouldn’t be until 1987 that Foreman would re-enter the ring at 38 years old. Foreman needed money for a youth center he created.

After winning an amazing 9 fights, while marketing various products from grills to car mufflers. More victories followed until he faced the legendary Evander Holyfield. Had online sportsbooks been invented, many wouldn’t be surprised at the victory by Holyfield. Foreman also lost to a young Tommy Morrison after a 12-round bout. Foreman’s last shot at gaining the legitimate title came with a bout against Moorer.

Michael Moorer had beaten Holyfield for the IBF and WBA titles and yet an unranked Foreman demanded a shot at the fighter 19 years his junior. In an astonishing effort, Foreman was able to win the fight and regain the title Ali took from him. Pushing for a fight with Iron Mike Tyson, Foreman never got the approval and wouldn’t submit to WBA terms. Finally, seeing the chance at the WBC title, Foreman lost by decision to Shannon Briggs in 1997. He would never fight again.