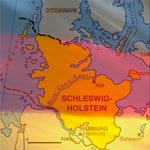 Currently, Schleswig-Holstein remains the only German state that changed German gambling laws in a way to allow legal online gambling within the state. Read more in our (New Law Permits Online Gambling in One German State) article. Recently the state’s lawmakers have indicated approximate price range for gaming licenses.

In January 2012 the state will start accepting application for gaming licenses allowing operation of online sportsbooks and online casinos in Germany. Draft proposals set for ratification in October-November 2011, put the license prices at EUR 15,000 at the outset with annual fees ranging from EUR 15,000 to EUR 150,000 depending on the operator’s turnover.

Germany gambling news learned from sources close to the state’s legislators that there is already a great interest from major European online gaming operators.

In case Schleswig-Holstein does at least as good as Denmark in regards to online gaming, the state will never have to complain about empty coffers. Denmark licensing body recently stated that there’s a considerable response from gaming operators, despite somewhat draconian requirements and great tax implications.

According to Danish authorities 43 gaming companies have already submitted applications for a total of sixty eight licenses. The gaming market is scheduled to open in January 2012. Twenty five applications for casino and sports betting licenses and twenty two for dedicated online casino licenses have been made according to the Danish Gambling Authority.

Renowned sports betting operator Sportingbet, which recently carried out acquisition of two Danish operators, will definitely be among the new players on the Danish market. Identities of other license applicants have not been made public yet.