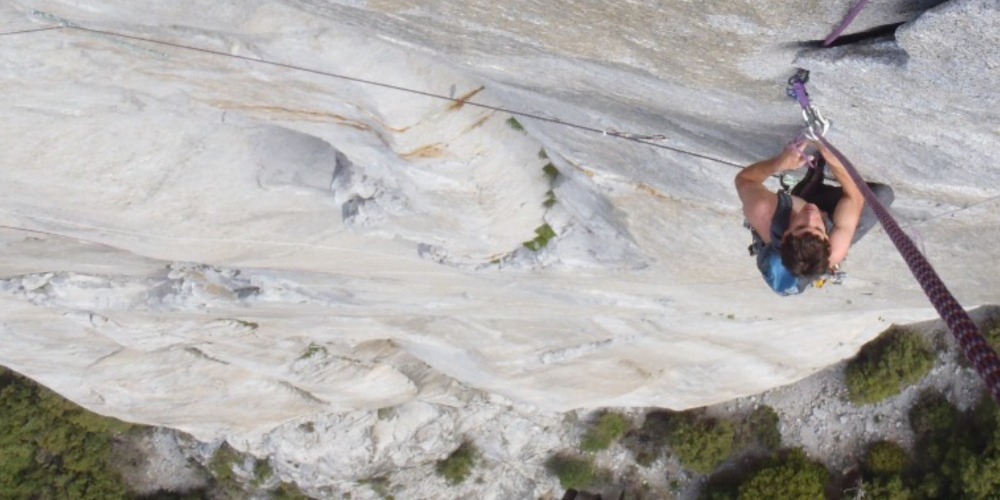 Extreme sports are dangerous in general; that is why many adrenalin junkies try them. However, there are heart-stopping extreme sports moments where a tiny mistake can cost someone their life. Skydiving, mountain climbing, free diving, etc., attracts more and more passionate pro and amateur athletes. Moreover, many people try to do traditional sports in extreme conditions and take them up a notch. Let’s see some brave adventurers!

David Blaine, famous for his extreme stunts, rose to a height of nearly 7500 meters with enormous, colorful helium balloons over the desert in Arizona before landing with the help of a parachute. Blaine tied dozens of balloons together for the experiment and had to put on an oxygen mask. He even had to drop down weights to quicken the pace upward.

After letting go of the balloons, he headed toward the ground in a free fall for 30 seconds before opening his parachute. According to Blaine, he had prepared for this stunt for two years, including pilot training. The extreme performer named his half-hour adventure Ascension, which YouTube did broadcast live. More than 700,000 viewers joined the live stream, which was a record.

The illusionist had been previously involved in a number of risky stunts. For example, he froze himself in an ice cube and was in it in Times Square for two days. Also, he spent 35 hours standing on top of a 20-meter-high column, 50 cm in diameter. Check out his other heart-stopping extreme sports moments at online sportsbook sites in the US!

An American athlete broke an unbelievable record when he conquered the most dangerous cliff without a safety rope. Alex Honnold, a mountain climber, was the first in the world to climb the famous El Capitan granite monolith in Yosemite National Park, alone, without safety equipment or rope. The then 31-year-old athlete free climbed the nearly one-kilometer vertical rock wall without a safety rope in 3 hours and 56 minutes.

National Geographic sponsored the heart-stopping extreme sports moment and made a documentary about it called Free Solo. Free climbers do not pull themselves up on ropes or carve hooks into the rocks. They climb from centimeter to centimeter, clinging to the bumps and cracks of the cliff with their fingers and feet. Climbing the El Capitan was preceded by very careful preparation because a single wrong movement could have been fatal.

However, he is famous for memorizing the right spots that are safe to touch and put weight on. He began climbing when he was 11 on a room climbing wall and even dropped out of college to conquer the world’s highest peaks. Honnold prepared for the seemingly impossible stunt for seven years and practiced climbing vertical mountain walls in the United States, China, Europe, and Morocco for a year. Check out what he is up to next at 22Bet!

Two athletes jumped from a mountain of four thousand meters into a small airplane. In honor of the creator of the wingsuit, Patrick de Gayardon, Fred Fugen, and Vince Reffet undertook a stunt that not many would dare to do. They jumped from the Bernese Alps’ 4,000-meter-high Jungfrau peak to sail through the air with their wingsuits, reaching a speed of 140 km / h, only to land in a small plane. After several months of planning and about a hundred test flights, the French couple successfully performed the heart-stopping extreme sports moment in the air. You can watch the video of the stunt at 22Bet!

Her expedition began in 2017, which she divided into 3-5 month periods. These sections are more demanding and much longer than her former trips. She plans to get around North America in two semicircles, both times, starting in Seattle and ending in New York. She first passed through the Northwest Passage, then through the Panama Canal and the Gulf of Mexico. The northern sections are only ice-free for a few months a year. So if she went in only one direction, it would extend the journey by years.

The whole mission could be up to 12 years, depending on how she fares. By the time she reaches her destination, she will be about 63 years old. Freya Hoffmeister kayaked around Iceland in 33 days in 2007, then circled Australia, 18,000 kilometers, in a record time of 11 months. She rounded South America in 2011, being the first to kayak around the continent. The 27,000-kilometer journey, which covered 13 countries, took 30 months. You can track her heart-stopping extreme sports moments at online sportsbook sites in the US!

The then 38-year-old long-distance swimmer planned to reach the shores of the city of Natal in northeastern Brazil in four months. Although the trip included wild storms and predators, Hooper was most concerned about his endurance. The athlete swam the distance freestyle, spending up to 12 hours a day in the water. He needed to keep up his strength, so he consumed 12,000 calories each day. Two ships assisted him, including a doctor, a physiotherapist, and a Guinness Book staff member.

Ben swam 12,000 kilometers in the ocean and swimming pools to prepare for the record. However, due to storm damage to his support vessel, he had to cancel the attempt after 33 days. The plan was to swim 2000 miles, but he could only cover 87 miles. Of course, he was devastated after years of preparations and hundreds of hours of practice, but he had to give up his dreams, and Benoit Lecomte remained the unofficial title holder. Check out more unbelievable sports-related Guinness World Records!

Cycling Through The Desert

Daniel Ofili overcame the harsh conditions of the Sahara when he cycled 1800 kilometers across the desert and managed to accomplish the impossible challenge. The then 23-year-old guy left behind his average lifestyle for the sake of adventure, and he completed the trip from Morocco to Senegal in 36 days. Daniel faced the challenges one by one and did everything to survive, including eating lizards and drinking his urine.

He only had a bike, a camera, a tent, sunglasses, a mask, a knife, and a piece of aluminum foil. Along the long journey, he faced several setbacks like dehydration, snake bite, thirst, hunger, the unforgiving sun, and only one pedal worked properly for 386 kilometers. Add these factors to the fact that he had to cycle in the hot sand, and you will understand the incredible consciousness and strength a challenge like that required. He deserved his place on the list of heart-stopping extreme sports moments! Though not everyone was lucky enough, check out our article about extreme sports deaths!