Here are 3 Possible Fights For Tony Bellew to Take Next 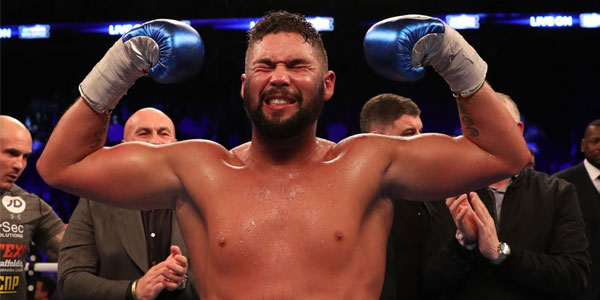 It’s only been a couple weeks since his huge upset over David Haye, and now we look ahead to three possible fights for Tony Bellew to take next.

The grudge match between Tony Bellew and David Haye finally took place on March 4th. Before the match, nearly all online sportsbooks in the UK listed Bellew as a massive betting underdog. He managed to prove the doubters wrong by stopping Haye in the 11th round, and many boxing betting experts are no predicting who he’ll take on next. In this article we take a look at a few options.

Possible next fights for Bellew

As we mentioned before, Bellew was a massive 5/1 betting underdog heading into the fight with Haye, according to BetVictor. The first few rounds of the fight were close, but an Achilles injury to Haye in the 6th round completely turned the tide in Bellew’s favor.

Tony went on to stop Haye in the 11th round, but some boxing analysts feel the victory was slightly unwarranted. He won, no doubt, but what would have happened in Haye’s injury hadn’t occurred? That’s the question many people are asking.

A rematch may not be the most likely, but it’s certainly one of the possible fights for Tony Bellew to take next. If they do throw down again, it will likely be Tony who receives the bigger purse, and the fight will most likely take place somewhere in Liverpool. The Bellew vs. Haye 2 betting odds have not been set, and it’s unclear who would come into this match as the betting favorite.

Current IBF heavyweight champion Anthony Joshua was sitting ringside for the Bellew-Haye fight, prompting some to speculate whether he was scouting his next opponent. Of course, Joshua is first set to face Wladimir Klitschko in April.

Joshua and Klitschko are set to face off on April 29th (photo: skysports.com)

Wladimir Klitschko hasn’t fought since an upset loss to Tyson Fury in 2015. He looked considerably slower in that fight, refusing to engage for the majority of the contest. He’s a significant underdog heading into this fight with Joshua according to BetVictor who lists his odds to win at 15/8.

There’s no doubt that Anthony is the favorite here. His odds to beat Klitschko are set at 2/5. Of course, anything can happen in boxing, and the winner of this contest is a top choice in terms of fights for Tony Bellew to take next.

Bellew’s next fight may also be across the pond. Deontay Wilder is the current WBC heavyweight champ, and has a perfect 38-0 record with 37 wins coming via stoppage. Bellew commented on the fight with Wilder possibly coming to fruition, stating “I want Deontay Wilder, you want to sit down with the big man?”

A bout between Bellew and Wilder would be extremely exciting for the fans. Both men are knockout artists with very different styles. Wilder would be the much bigger man in the ring, but Bellew has already made UK gambling news by beating a bigger opponent in David Haye.

Again, this fight is still hypothetical at this point, but it’s certainly one of the top fights for Tony Bellew to take next. The USA vs. UK boxing rivalry is still very much alive, and these two men are some of the best boxers above 200 pounds competing today.

What do you think of our list of fights for Tony Bellew to take next? Which of the ones we listed would you like to see the most? Tell us what you think in the comment section below, and make sure to check out BetVictor for a full list of 2017 boxing betting odds!