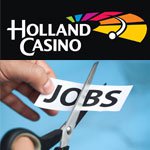 The state of both land-based and online casinos in the Netherlands has been under the microscope for some time now, and that’s not about to change as gambling monopoly Holland Casino has announced yet more job cuts as it attempts to return to at least somewhere close to profitability.

After a recent reorganization that shed 350 jobs from the company, the firm have decided to decentralize a lot of their decision making, allowing them to drop another 100 employees from their roster. Considering the very tight Dutch gambling laws – online gambling is strictly prohibited, just see the EUR 100,000 fine handed out to Curacao based operator Global Stars earlier this year – gambling seems to be on the ropes in the Netherlands.

Despite the move to give their 14 land-based casinos more say in operational matters, Holland Casino are all set for a EUR 30 million loss this year, as their debts grow considerably again. This year alone, the company has seen the departure of Chairman Dick Flink after nearly six years, as well as its placing under financial supervision due to spiraling debt and increasing losses.

Mobile casinos may be on the rise throughout Europe, but the Netherlands seems immune to the rest of the continents love of online and mobile gambling. Whether this is just due to regulatory restrictions or a simple preference for other forms of entertainment, who knows. Interestingly, neighboring country Belgium has some of the strictest gambling regulations on the planet.

So, while the rest of Europe starts to regulate their gambling markets, there is a chance that the Netherlands could be forced into a policy rethink, especially if Holland Casino continues its steady decline. Perhaps we’ll see some outsiders coming into the country in the near future after all.