How Many Goals Can Barcelona Score Against Ajax: Fresh Champions League Betting Odds 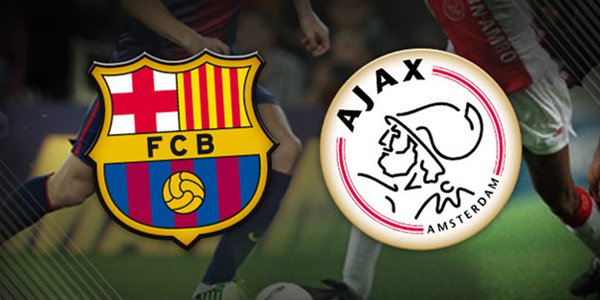 Barcelona are widely expected to beat Ajax in tonight’s Champions League fixture, the question is: “how many can they score?”

The third matchday of this season’s Champions League brings an interesting match to the attention of all football fans and punters wagering under Spanish gambling laws. Barcelona and Ajax will embark upon two matches together interchanging fields with two week’s difference.

A bit of history

• Online sportsbooks in Spain are naturally favoring Barca to win

• Punters can find a lot of value in choosing scorecast odds

Both teams are no strangers to winning the most prestigious European football tournament with four titles a piece. However, while Barca’s latest success came in 2010/2011 season, Ajax have last won the Champions League back in 1994/1995 and failed to impress during the last several seasons.

Those who bet on sports in Spain will know that the two teams have only met once in the framework of Champions League, regardless of how surprising that might sound. They were drawn in the same group last season as well and while Barcelona thrashed the Dutch 4-0 on Camp Nou, Ajax managed to pick up a 2-1 win in Amsterdam.

Barcelona went all the way until the quarter-finals last season, while Ajax were forced to join Europa League after failing to qualify for the next stage in the Champions League. Needless to say, the Dutch were humiliated by Salzburg, losing out 1-6 on aggregate in the Round of 32 there.

Barcelona’s fans are a little bit worried by the recent string of only narrow wins, but much hope is placed on the upcoming double rivalry with Ajax. Most online sportsbooks in Spain are of course favoring the Catalan to win and only the first game at home, but the upcoming away match as well.

Messi and Co are yet to really shine in this edition of Champions League, having beaten Apoel with a single goal, and losing out 2-3 to PSG in Paris. Luis Enrique’s men are off to a relatively good start in Primera currently leading the table, but their performance in the European cup needs to turn for the better if they were to really be considered as one of the favorites to win the trophy.

The defeat against PSG can only mean that Barcelona need to win tonight’s fixture if they want to top their group. A good performance with several goals is also needed to boost their morale. The upcoming game will also serve as a good practice for the upcoming first Clasico of the season to be held in Madrid this Saturday.

As for Ajax, the Dutch champions are flying to Spain not enjoying the best of forms, having recorded two straight draws in domestic league and a 1-1 with Apoel in the last round of Champions League. This easily explains why Ajax are not considered to have a lot of chances at Camp Nou tonight.

Betting on the game

Yes, BetVictor is giving a rather short line for Barca’s victory tonight: 1.14, providing Ajax with almost impossible odds of 23.00 and valuing the draw at 9.50. No surprise to see 2-0 and 3-0 as the most probable outcomes of the game with 7.00 odds. But what’s really interesting is the choice of scorecast odds at the bookies.

Smart punters will of course combine tonight’s bets in order to make them more profitable compared to just straight wagers. BetVictor’s 4.00 line on Barca to win with under 3.5 goals and Messi to score is a very attractive proposition indeed, considering the blasting form the Argentinean has been enjoying lately.

Also worth noting is the line of 2.90 for Barca to win and both teams to score, although chances of Ajax putting one in are rather slim. One of the easiest choices is wagering on Barcelona to win with over 2.5 goals and Neymar finding the back of the net at least once – this event will bring a 2.00 payout, not a bad wager indeed.