Japanese ​Sumo wrestlers are in need of Apple iPhone Confession app after match-fixing, even though this may not have been gambling related. 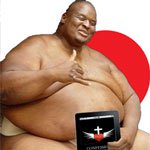 Sumo wrestlers in Japan are in serious need of the highly vaunted Apple iPhone Confession app after match-fixing outraged the sumo wrestling industry and caused millions of dollars to be lost, even though the sumo match-fixing may not have been gambling related.

While it is true that a Sumo gambling scandal plagues Japan, it is currently being denied that the match-fixing which is coming to light has any connection with either paying off gambling debts or taking bribes from bookies or high-rollers. Instead, experts suggest that the game-rigging has been for the sake of maintaining rank and status. In additional to concerns over potential lost salary, only the top athletes in the 1,500 year old sport are permitted to wed and reside away from the “stables” (gyms) in which they are members.

The cheating became exposed after a police investigation of sumo wrestlers betting on sports, especially on professional baseball, which is forbidden by Japanese gambling laws. The bets were taken by gangsters and often placed by text message over mobile phones.

Critics accuse the Japan Sumo Association (JSA) of treating past scandals lightly. They expect merely a few sumo wrestlers to be fired and other superficial actions to be slowly and inadequately taken. Moreover Keio University Professor Takanobu Nakajima suggests the JSA will specifically refrain from investigating how matches may have been fixed before there was internet betting in Japan.

Nakajima decried “Declaring that as the end of the matter would probably be the biggest betrayal to fans, and the JSA should be aware of that… That would put them so out of touch with the public,” while Sumo Fan Magazine Editor Mark Buckton declared “You’ve got to have the Sumo Association audited on a moral scale”.