Juan Montoya’s Career is a Testament to Racing Versatility

News >Juan Montoya’s Career is a Testament to Racing Versatility 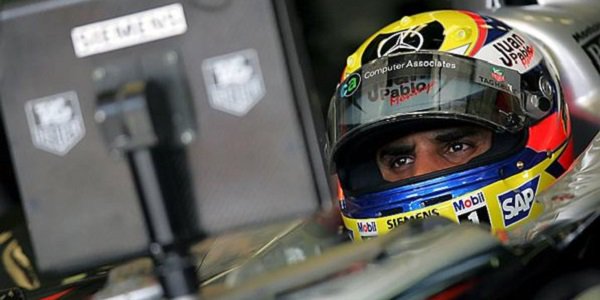 Juan Pablo Montoya was on pace to be the first driver in nine years to win 2015 Verizon Indycar Series Championship while leading in points throughout the entire season. Unfortunately, the driver suffered from damage to his car and ended up in 21st position. This gave Scott Dixon the slim opportunity to win the race and overcome his 47-point deficit for the championship. Montoya’s loss of the championship made US gambling news.

• Montoya led the 2015 Verizon Indycar Series all year but lost the championship
• The Columbian won races in Indy cars, Formula One and NASCAR
• The driver won the Indianapolis 500 twice in his four years with Indy cars

Juan Montoya’s career was not greatly affected by the loss and the two-time Indianapolis 500 winner had words to say on the outcome. “As I told you, it could happen, and it happened. Dixon had a (expletive) season all year and had one good race, and we paid the penalty.” The driver who’s won races in Indy cars, Formula One and NASCAR vowed to be back next year. Let’s look at what makes him able to “back up his words.”

The young Colombian was a promising star right from the beginning

Juan Pablo Montoya was born in Bogota, Colombia and was taught karting techniques from his father who was a racing fan. He entered the Colombian Formula Renault Series at 17 years old in 1992. Quickly gaining success, the future racing champion won four out of eight races while securing five poles. The young Montoya sought additional instruction as he enrolled at the Skip Barber driving school in the US.

A year later he changed to the Swift GTI Championship where he won seven of eight races while earning eight poles. After graduating from college at San Tarsicio in Bogota, the young hopeful raced in British Formula Vauxhall Championship and the British Formula 3. In 1997, Montoya was hired by the RSM Marko Formula 3000 team and finished his first season in second place in point standings. WilliamsF1 noticed the young driver’s potential and signed him as a test driver

The Formula One test driver won the F3000 championship and a record four consecutive pole positions. As a result of the trade to rebuild the Williams team, Montoya moved to the American Indy racing series. The move proved brilliant for Juan Montoya’s career as he became an American sensation securing 1999 title. Although he became the youngest driver to win the CART FedEx Championship Series, he had critics like the legendary Mario Andretti who found him too aggressive.

Besides Williams, Montoya had F1 success with McLaren too

Williams, who kept their relationship with Montoya, wanted him to return to Formula One. Montoya would put his return to Williams on hold to race one more season in the U.S.. Although Toyota’s faulty engine led Montoya to only finish 60 percent of his races, the driver won the Indianapolis 500 on his first attempt. The easy victory for the champion made him the first Colombian winner ever. If there were online sportsbooks in the US, they would have taken notice of Montoya.

Juan Montoya’s career went to another level as he signed a two-year deal with Williams-BMW and partner up with Ralf Shumacher in 2001. In his third race, Montoya nearly defeated world champion Michael Shumacher but was rammed in the back and failed to finish the race. Although he won his first victory at the 2001 Italian Grand Prix at Monza, the Colombian only finished six races.

In 2002 Michael Shumacher and Rubens Barrichello won 15 of 17 races for Ferrari and left very little room for Montoya to win. Despite Ferrari being the favorite among any guaranteed sports betting system, the Colombian was considered Michael Shumacher’s closest competitor finishing the season in third place. He would secure his third position in the following year and fifth position in his final year with Williams.

Montoya signed with McLaren, but found problems with the steering of the car. After much input, the car improved as did the Colombian driver who finished fourth in standings. The next season, Montoya failed to drive up to his standards and after finishing the season in fifth place left Formula One to race for the NASCAR circuit. It took the young driver over one season to get adjusted to stock cars and secure his first victory.

The NASCAR hopeful stayed nine years with the Sprint Cup Series and achieved only two wins. Although his highest finish was eighth place, the Colombian driver made 59 top ten finishes and secured nine poles. Juan Montoya’s career took a final turn as he retired from NASCAR and committed to IndyCar driving to the satisfaction of those mobile betting. The move proved better for Montoya as he’s had more success and keeps getting stronger for the future.