LaMotta and Robinson: A Story of The Mafia and The Boxing Industry (part2)

News >LaMotta and Robinson: A Story of The Mafia and The Boxing Industry (part2) 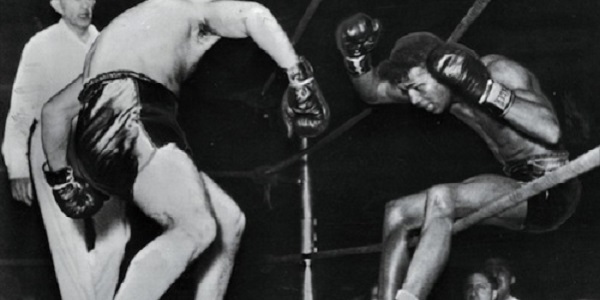 We continue looking at the darker side of the boxing industry.

Former middleweight champion Jake LaMotta spent five years trying to avoid the trappings of the Mafia. Known for his grit and toughness in the ring, LaMotta was called “Raging Bull.” Finally, through his brother, LaMotta was offered a deal for the championship, in exchange for loyalty to the Mafia. LaMotta signed with the devil and intentionally lost a bout.

• Robinson retired in 1952 and pursued a career as a dancer.
• Desperate for money, Robinson signed his exclusive rights to James Norris.
• Ali defeated Liston in their rematch under questionable circumstances.

LaMotta shared the same fate as many young fighters desperate to get out of their meager conditions. That is to become victimized by others more desperate to get out of their conditions as well, but with less respect for human frailty. LaMotta finally got his championship bout and won. He reunited his arch rival Sugar Ray Robinson in what was well known in US gambling news as the “St. Valentine’s Day Masssacre.

Once Sugar Ray Robinson reclaimed his middleweight title, he reveled in his celebrity. Robinson was the first boxer to have what would be later called an “entourage” or group of people who would follow him wherever he went. Robinson felt himself such a showman, he retired in 1952 and pursued a career as a dancer. His dancing was more effective in the ring than it was on stage.

It wouldn’t be long before a lack of success and the pursuit by the tax authorities forced Robinson out of retirement. Within a year, Robinson was able to gain the championship title once again. Desperate for money, Robinson signed an exclusive deal given all his rights to James Norris of the International Boxing Club. Norris only wanted Robinson to keep winning and when he lost, prepare for the rematch.

In the late 1950’s, Norris’ supremacy began to wane as the authorities pursued Frank Carbo. Even though Mr. Grey had been arrested 17 times for crimes ranging from gambling outside US gambling laws to murder, the mafia controlled of the court system kept him from prison. Using Jackie Leonard, boxing promoter, worked with the law to make several secret recordings that led to Carbo’s two-year incarceration.

Carbo was let out early to assist in a plea bargain to expose the mafia’s stranglehold on boxing. During the U.S Senate subcommittee in 1960, Carbo plead to the 5th amendment when questioned about corruption, yet LaMotta admitted dealing with the mafia. Carbo was sent to prison for 25 years, but maintained influence in the boxing world. His newest way to maintain his power was through a boxer called Sonny Liston.

Sonny Liston becomes a newest meal ticket for the mafia

Sonny Liston learned to fight while in prison on Assault charges. Liston was able to take on a well loved and respected Floyd Patterson in 1962. Liston demolished Patterson in 2 minutes and 6 seconds becoming the world heavyweight champion. Patterson failed to ever have the support of American audiences. Liston found a competitor in Muhammad Ali.

Ali dominated most of the fight until he complained of his eyes being irritated. Although coach Angelo Dundee did what he could to clean his eyes, Ali had to go into the next round blinded while avoided Liston. Many conspiracy websites believe that the mafia was equipped Liston with this powder on his gloves in order to blind Ali. In his two previous bouts, Liston’s opponents complained of eye irritation.

Ali eyes finally cleared up and overtook a tired Liston who refused to come out of the corner in the 7th round. In 1965, a rematch was set, but under the aura of Ali’s new conversion to Islam. Within the first two minutes, Ali knocked Liston down by questionable circumstances. So questionable was the blow, many people called the “phantom punch.” Liston’s refusal to get up, made many believe he threw the fight.

The defeat marked the mafia’s declining influence. Liston never got another shot at the title and much of his remaining earnings went to the mafia. Muhammed Ali would go on to be one of the greatest heavyweights ever. Ali still couldn’t avoid the mafia as a result of his dealings with his promoter Don King who mastered finding the balance between using legal channels as well as making proper concessions to set up some of the greatest fights seen in boxing history.