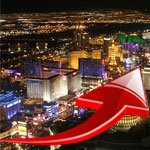 The United States gambling news seem to be full of praises for Nevada. The reports just came in about the revenues from the Silver State, and they look more than positive. According to the Nevada State Gaming Control Board, there was a 17 percent growth in casino revenues in the Silver State during July 2012 year-on-year.

This figure means two things. First, they are State-wide overall results that among others combine the reports from Nevada’s three main gambling areas. Las Vegas is by far the biggest in the Southern part of the State, second is Reno in the North, and there’s South Lake Tahoe. Second, this July’s results are compared to the same period last year (year-on-year).

The revenue from Nevada’s casinos attributed to a total of $1 Billion in July 2012 alone. This huge amount of money generates jobs and secures tax revenue for the State. On top of that, the State of Nevada collected roughly $68 Million in winnings taxes, the VC Star reports. This is a 40 percent increase compared to last year. One can easily see that it pays for Nevada to have correct American gambling laws.

Let’s break down the sum. The 17 percent growth comes largely from establishments in the city of Las Vegas. The Las Vegas Strip revenues counted almost $600 million, (28 percent rise year-on-year). Downtown Las Vegas is responsible for $41 Million, which is an over 16 percent increase compared to last July. Vegas booms, baby.

Eager to visit to Nevada, but just can’t go now? You can always try one of the online casinos in United States.