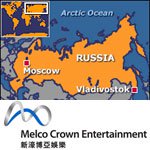 Investors have not been scrambling to build casinos in the Russian Federation since Russian gambling laws were changed in 2006 to exile the country’s casino business to four remote regions.

This may now change, according to gambling news reports that indicate possible investment by Macau casino tycoon Lawrence Ho.

The Co-Chairman of casino giant Melco Crown has set his eyes on Vladivostok, the capital city of Russia’s Primorsky region, in the far southeast of the country.

Primorsky is one of the four dedicated casino regions and is a stone’s throw from China. It is also close to North Korea, but not many visitors are expected from that neighbor. China, on the other hand could provide a steady stream of players.

The absence of legal casino gambling at home means that Chinese players must either play illegally or travel abroad. This latter option usually meant Macao for most of them. Casino gambling in Russia’s Far East, however, is a much closer alternative for many.

“A lot of people don’t realize that Vladivostok is an Asian casino opportunity that happens to be in Russia,” points out Dean Macomber of the consulting company Macomber International.

Although the lack of legal clarity and stability, as well as the widespread presence of corruption has deterred some investors, there are several factors that compensate for these shortcomings. In addition to the Asian location, Russia also has a low tax rate and a world-class casino resort can be built for a fraction of what it would cost in Macau.

Along with Mr. Ho there could also be other casino investors setting up operations around Vladivostok.