The major political parties in Germany have distinctly different opinions upon the future of German gambling laws. 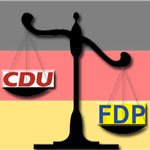 The major political parties in Germany have distinctly different opinions upon the future of German gambling laws. Björn Thümler, parliamentary leader of the Lower Saxony Christian Democratic Union (CDU) feels that the Free Democratic Party (FDU) objective of opening the market “denies [the] split market existing between state monopoly and the Internet black market”. Instead, he wishes to maximize the revenue possibilities both in the state and on the internet for Oddset, the state sports betting firm, and the state lottery, by merging the two gambling operations. In complete opposition, the Liberals in Hanover, a CDU coalition partner, wish to permit a big private sports betting firm, in order for countries to recoup revenue that has diminished over recent months.

Gold Media’s scientific study suggests liberalization will cost the Lower Saxony state treasury enormously. Dr. Wulf Hambach, whose company won an award as Gaming Law Firm of the Year in 2010 from Global Law Experts (GLE) claims “It will tax income amounted to a liberalization in 2015 around 516 million euro.” If the liberalization were to increase tax revenue 39% while the status quo is in diminished, by 2015, the revenue of the country will improve 29%, around €235 million.

The Gold Media study also examined how the government could exploit 5 million German online poker players, concluding that Germany must grant licenses to the major online poker sites in Germany in order to effectively regulate and tax the existing industry. All parties have come to agreement that blocking foreign poker sites would not be practical or effective from a technical standpoint. Hambleton declared “The central control of the data flow of the licensed provider [and] a central online gaming regulator with a nationwide role model compliance with the law would directly monitor and determine the suppliers’ sales directly, so they could enjoy the tax [they] will be subjected to.” In particular, upon examining Italy and France, PokerStars is expected to invest in a well-regulated and sustainable market and consequently pay taxes.

The enforcement of a European Union gambling tax on sports betting and poker events by January 1st 2012, along with a management fee for the Gaming Board, is expected to simplify “the Recovery” of lost gambling revenues.

Gold Media maintains that if the current system in Germany is maintained, gross gambling revenue will continue to decline, resulting in a €1.5 billion loss, with the grey and black markets receiving 30% of the total market. Responsible politicians should not allow this. According to Gold Media, liberalization will allow the German market to grow €5.2 billion between traditional and internet gambling in Germany.