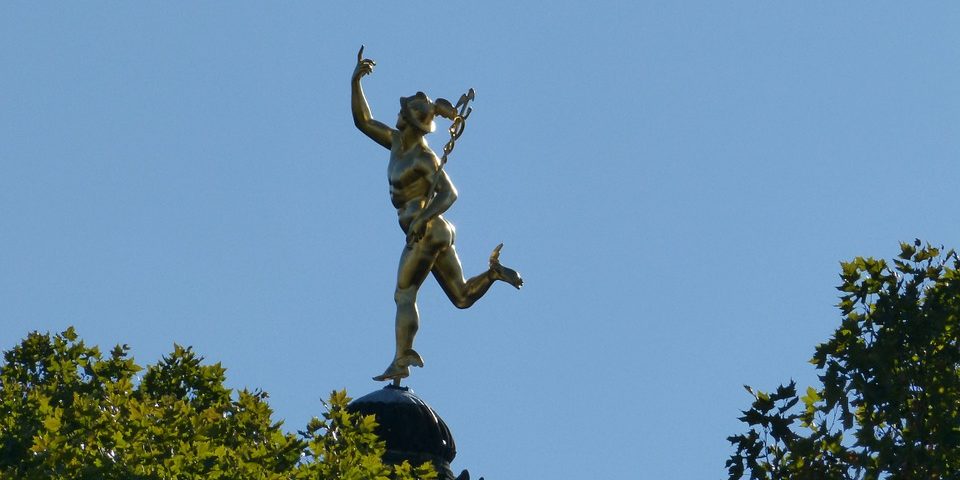 Believe in the lucky gambling gods? Which ones do you pray to? Because of the nature of gambling, it’s not surprising that gamblers are a superstitious bunch. The same goes for gamblers from the distant past. There are always Gods and deities, who, with the right prayers or offerings, might bring about a change in your fortunes. Let’s have a look at some historic ones from around the world.

In “The Iliad” we briefly meet Hermes who plays an important role in securing the return of Hectors body to his father Priam. He is, of course the messenger of the Gods, with his winged shoes. But he’s also one of Zeus’s most mischievous sons and has been known as the god of gambling for centuries. I’m sure he uses Intertops Poker! Remember that gambling plays a significant role in ancient Greek mythology. Zeus, Poseidon and Hades decided to split the universe based on a game of dice.

Thoth – The Egyptian God of Gambling

The English occultist, Aleister Crowley named his deck of Tarot cards, the Book of Thoth, after one of the most famous of all Egyptian gods. Thoth is seen as the god of hieroglyphs, science, wisdom, writing, the moon, magic, art, judgment, and the dead. He is also associated with magic. According to myth, the year was only 360 days in length. during this period the shy goddess Nut was unable to have children. Thoth played dice with the Moon for 1/72nd of it’s light (5 days). He won and during these 5 days Nut gave birth to Osiris, Set, Isis, and Nephthys. To that end, it’s not surprising that he is the God of Gambling. Not to be confused with “Thot”!

Macuilxochitl – The Aztec God of Gambling

In Aztec mythology there are a group of five gods, called the Macuiltonaleque, who embody the excesses of vice, be it drinking or gambling. One of these five is called Macuilxochitl or Xochipilli and is dedicated to gambling, games, beauty, dances, song, and flowers. The Aztecs prayed to him when playing games. He was originally worshiped by the Teotihuacan civilization, 1,000 years before the Aztecs, but was later adopted by them.

Gambling news from the US says that this is the name of the Great Gambling God of the Navajo. According to the myth, he came to earth to teach the people his gambling games. But he soon began winning very thing from the people, houses, animals, wives and their children. Once he had taken everything, he promised to return them in exchange for a huge house. The problem was that the tribe continued to gamble with Nohoipili. One day, a member of the tribe was able to learn all the gambling secrets and with them, was able to convince Nohoipili to go to his big house in the sky. The Moon God felt sorry for him, so created a people for him to rule over; the Mexicans.

Nezha – The Chinese God of Gambling

There are many lucky gambling gods in China. But the most famous is Nezha. After his mother was pregnant with him for three years and six month, out popped a fully formed little boy as opposed to a baby. He eventually fought the son of the Dragon King, Ao-Ping and defeated him. As you do. However, soon after the father wanted revenge and so Nezha committed suicide in order to save his family and people. That escalated quickly! Later he came back to life and then spent his time between heaven and earth. The people of China started to worship him for help with lotteries and general gambling, according to online gambling news.

Lakshmi- The Goddess of Good Fortune

She is the wife of the God Vishnu. She is also the goddess of wealth, prosperity and good fortune. So it doesn’t take a degree in rocket science to see her appeal to gamblers. It should be noted that she has an aversion against greed. When the God of War, Indra was tasked with protecting the world from demons, his cockiness led to 1,000 of bad luck as the demons slowly gained in power. Finally Indra asked Lakshmi for help. After a lot of work, she agreed to come to the world’s aid. Because she rid the world of evil and she made Indra work very hard to gain her help, she is seen as only helping those who are sincere and really in need. Like those hard working punters who bet with Intertops poker.